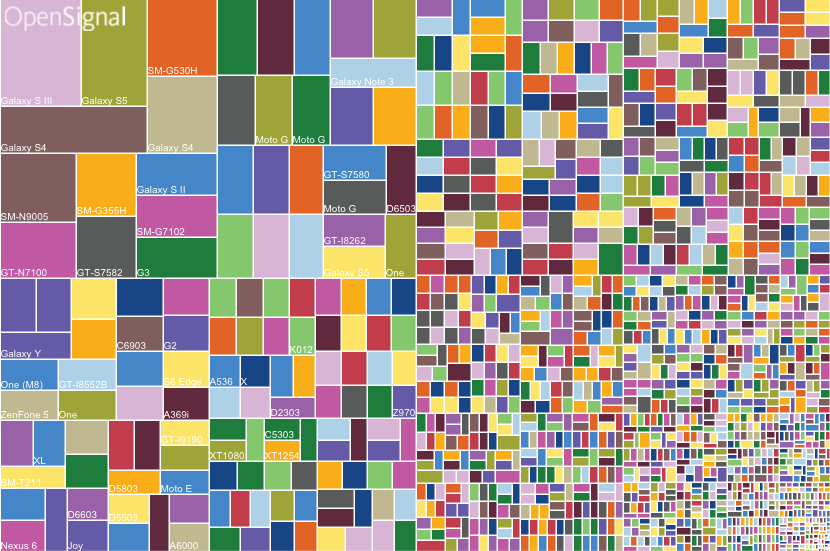 Developers building applications for Android have a plethora of options to choose from when it comes to devices, and that landscape is only continuing to grow. According to a recent report from OpenSignal, 2015 saw 24,093 different Android devices from 1,294 different brands, compared to 18,796 devices from last year.

“This year we see a continuation of the trends seen in previous reports; more devices and more differentiation between the devices out there,” OpenSignal wrote in its Android Fragmentation Visualized report. “One big thing we’ve noticed this year is the increased fragmentation of brands, with over 1,000 brands seen this year that we did not see in 2012 when we first published this report.”

(Related: Android to get monthly security patches from Google, LG and Samsung)

As the number of devices keeps rising, OpenSignal also sees a trend in bigger and more powerful devices, as well as an increase in embedded physical and virtual sensors. “Screens are bigger, CPUs have more cores, and mobile devices now contain more RAM than your average desktop not too long ago,” the company wrote on its blog.

While Android’s growth gives developers an array of choices, it also can be seen as a constant struggle for developers having to develop their applications on a variety of different screen sizes and operating systems. “Fragmentation is both a strength and weakness of the Android ecosystem, a headache for developers that also provides the basis for Android’s global reach. Android devices come in all shapes and sizes, with vastly different performance levels and screen sizes,” according to OpenSignal.

Other findings of the report revealed Samsung dominates the device space with 37.8% of the Android market, and a slight reduction in the operating system’s fragmentation with KitKat the dominant API version.