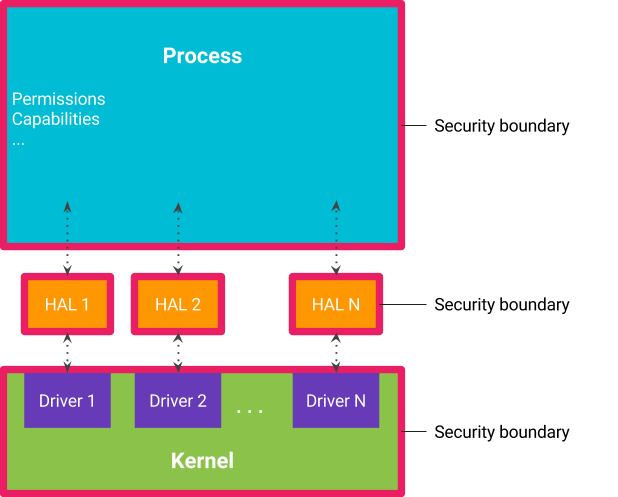 Since updates can be expensive for device manufacturers, Android is separating the vendor implementation from the core Android framework. This will allow platform and vendor components to be updated independently.

First, Android needed to isolate the Hardware Abstraction Layer (HAL), which provides an interface between device-agnostic code and device-specific hardware implementations. According to Android, HALs “are commonly packaged as shared libraries loaded directly into the process that requires hardware interaction. Security boundaries are enforced at the process level. Therefore, loading the HAL into a process means that the HAL is running in the same security context as the process it’s loaded into.”

As part of Android’s Project Treble, HALs were moved out of system server, including its HALs for sensors, GPS, fingerprint, Wi-Fi, and more.

More information on Android HALs can be found here.

Bluetooth introduces new mesh networking
Bluetooth announced that it now supports mesh networking, which enables device communications. Mesh networking is suited for automation, sensor networks, and other IoT solutions where devices need to connect securely and reliably, according to the company.

“Bluetooth mesh networking is the most robust and powerful low-power radio technology for connected lighting in commercial spaces, and it is the change the lighting industry has been waiting for,” said Rafal Han, CEO of Silvair, a smart lighting provider with the Bluetooth mesh stack.

Bluetooth mesh networking utilizes a managed flood approach for message transmission, according to a company announcement. It’s a simple and reliable form of message relay that will work for low-power wireless mesh networks.