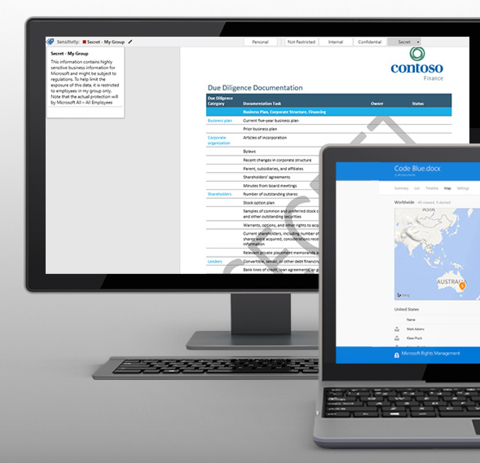 Microsoft is introducing a new service that combines its Azure Rights Management (Azure RMS) and technology from its acquisition of Secure Islands. The Microsoft Azure Information Protection service is designed to give enterprises a new solution to protect employee identity, and to secure and manage devices, apps, and data.

“Organizations must protect their data at the source in a world where information travels beyond the boundary of the corporate network and potentially across many devices outside of company control,” wrote Dan Plastina, partner director of information protection at Microsoft, in a blog post. “These realities make it more critical than ever to have solutions that prevent data loss and track information at the file level regardless of where data resides or with whom it is shared.”

The public preview is expected to be made available next month.

Android N will try to avoid unforeseen crashes
Google wants to help protect and improve the stability of Android N apps. The company revealed it will restrict certain libraries developers C/C++ code can link against in order to protect their applications from crashes. Android N apps that use private symbols from the libraries will have to update to public NDK APIs or include a copy of the library.

“We’re making this change because it’s painful for users when their apps stop working after a platform update,” wrote Dimitry Ivanov and Elliott Hughes, software engineers for Google, in a blog post. “Whether they blame the app developer or the platform, everybody loses. Users should have a consistent app experience across updates, and developers shouldn’t have to make emergency app updates to handle platform changes. For that reason, we recommend against using private C/C++ symbols.”

“Adopting a variety of cloud and dynamic infrastructures are a necessity in today’s application economy, but cost efficiencies and agility offered by these technologies are lost when operations staff have to learn and use multiple monitoring tools to identify potential performance issues,” said Ali Siddiqui, general manager of agile operations at CA Technologies. “By providing insight across the performance of all of an organization’s IT resources in a single and unified view, CA UIM gives users the power to choose the right mix of modern cloud-enablement technologies that can best support new endeavors that can contribute to business growth.”

Apple adds new coding camp for kids
As a way to inspire more children to learn how to code, Apple has added a new summer camp to its Apple Camp program for 2016.

Apple Camp is a free three-day program for kids ages eight to 12. The new program is called “Coding Games and Programming Robots,” and it will help kids learn the basics of coding.

With this camp, kids will learn visual block-based coding for games; applying logic skills like pattern recognition and problem solving; and they will be able to use what they learned to make their own robots.

Registration for this new camp is open now, and there are a limited number of spots per camp.

Opera releases Labs build for Android
Opera has released a Labs build of Opera for Android with support for two experimental features designed to enhance the discoverability and use of progressive web apps.

Opera has been exploring the idea of having a button in the URL bar that appears whenever a person lands on a progressive web app, which they can tap to save it to a home screen. Opera is previewing an early version of this idea in this Labs build.

When a user loads a site that passes the criteria to qualify as a progressive web app, a small phone icon is shown to the left of the URL bar, labeling it as such, according to Opera. People can check out one of the sites listed on pwa.rocks and let Opera know how it works.

Opera has also been exploring the idea of surfacing URLs by requiring users to long-press anywhere in the web app and show it in the context menu, but it turned out to be more difficult than expected, said the company. It then focused on connecting it to the “pulls—refresh” spinner as a secondary gesture to the left or right.

These are early proposals that may or may not be included in the final Opera build for Android, said the company.