Report: Android tops the list of most vulnerable products of 2016

Google made headlines last year, and not always for good reasons. In addition to the company’s updates to the Android operating system, it also faced articles detailing the many vulnerabilities plaguing the OS. As a result, one report has found Android to be the most vulnerable product of 2016.

According to CVE Details, a common vulnerability and exposure database and information provider, Android had the most distinct vulnerabilities in 2016 with 523, followed by Debian Linux (319), Ubuntu Linux (278), Flash Player (266), and Leap (259). 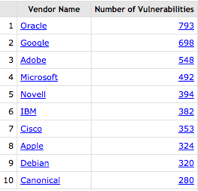 On top of that, Google started the year with a security update to address more than 50 vulnerabilities. The severity of these bugs ranged from moderate to critical.