Low-code application development platforms are designed to enable rapid creation, quick setup and deployment of applications with a minimum of traditional “hand coding.” For applications and systems engaging directly with customers, low-code platforms provide visual tools to quickly define and build forms and user experiences. Traditional coding is still essential in deploying an application to production, but visual low-code tools are gaining traction throughout the development process (for building out multi-stage workflows and configuring data models, as examples).

According to research firm Forrester, which coined the term “low-code,” the driving factor behind the rise of low-code platforms is the pressing need for companies to deliver and adapt high volumes of new apps fast, combined with dwindling developer resources to hand-code the overabundance of new applications. Forrester recently published a report on low-code development entitled “New Development Platforms Emerge For Customer-Facing Applications,” which explains why low-code platforms have taken hold, breaks down the software companies in the space, and discusses why low-code development is a solution, not a shortcut.

But really, what is low-code development?
Low-code development isn’t a completely new concept; it’s simply a practice that had never been defined before. According to Forrester analyst Clay Richardson, one of the report’s co-authors, the official term’s origins trace back to a 2011 report on new productivity platforms for custom applications.

“Around [that] time, Forrester began highlighting the need for workflow and process-change platforms to become more lightweight and nimble,” he said. “We decided to bring these two streams of research together in 2013 to focus on speeding up development for customer-facing applications, which is where the term ‘low-code’ really stuck. Through dozens of interviews with companies, we found that the low-code imperative was strongest for teams trying to quickly build apps in response to customer demands and customer needs.”

Beyond the obvious benefit of cutting down on coding to accelerate development, low-code platforms also provide a single point of control to configure, deliver and maintain apps. In these centralized environments, developers can merge design, development and deployment under the same platform, allowing not only for responsively designed Web and mobile applications, but also the freedom to experiment based on the customer or enterprise requirements.

“Several companies mentioned the term ‘test-and-learn,’ ” Richardson said. “In one case, a development lead pointed out that he needed a platform that could support quick experimentation with new ideas business leaders brought to him. He needed a way to quickly build an app and test the idea with customers, but also needed a platform that could quickly shift from prototyping an experimental app to deploying the app to production across broad base of customers. We believe low-code platforms are optimized for this ‘test-and-learn’ aspect of agile, which is becoming an essential ingredient for building customer-facing apps.” 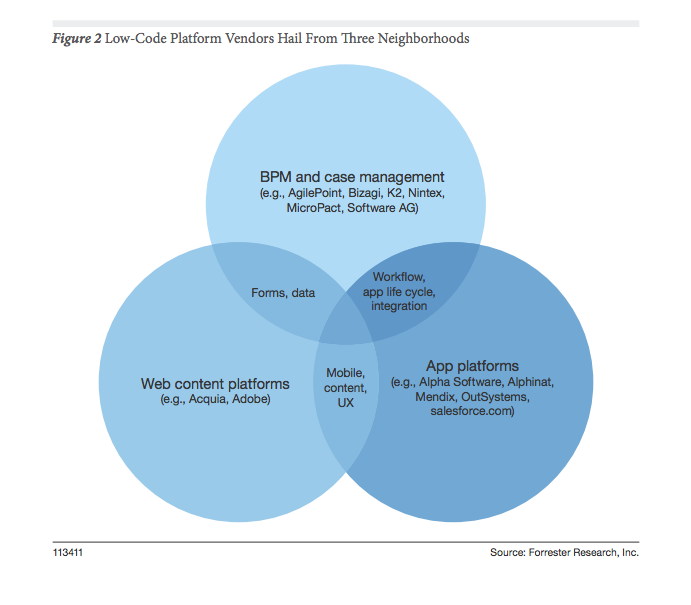 There is the business-process management (BPM) neighborhood, the Web content-management neighborhood, and the general-purpose and public cloud platform neighborhood. Each has its own area of low-code tools—be it enterprise suites, HTML and CSS Web frameworks or integration, workflow, and database platforms—but the principle of simplifying a developer’s coding workload is constant.

“While low-code is coming into vogue today, the approach has been core to delivering a high-performance RAD [rapid application development] platform for many years,” said Dion McCormick, director of customer solutions for Alpha Software. “Our focus has always been speed of development, and to get there, you must reduce the amount of coding developers are required to do. Developers need the confidence that they can dive in and code at any time, the assurance they’ll never hit the wall.” 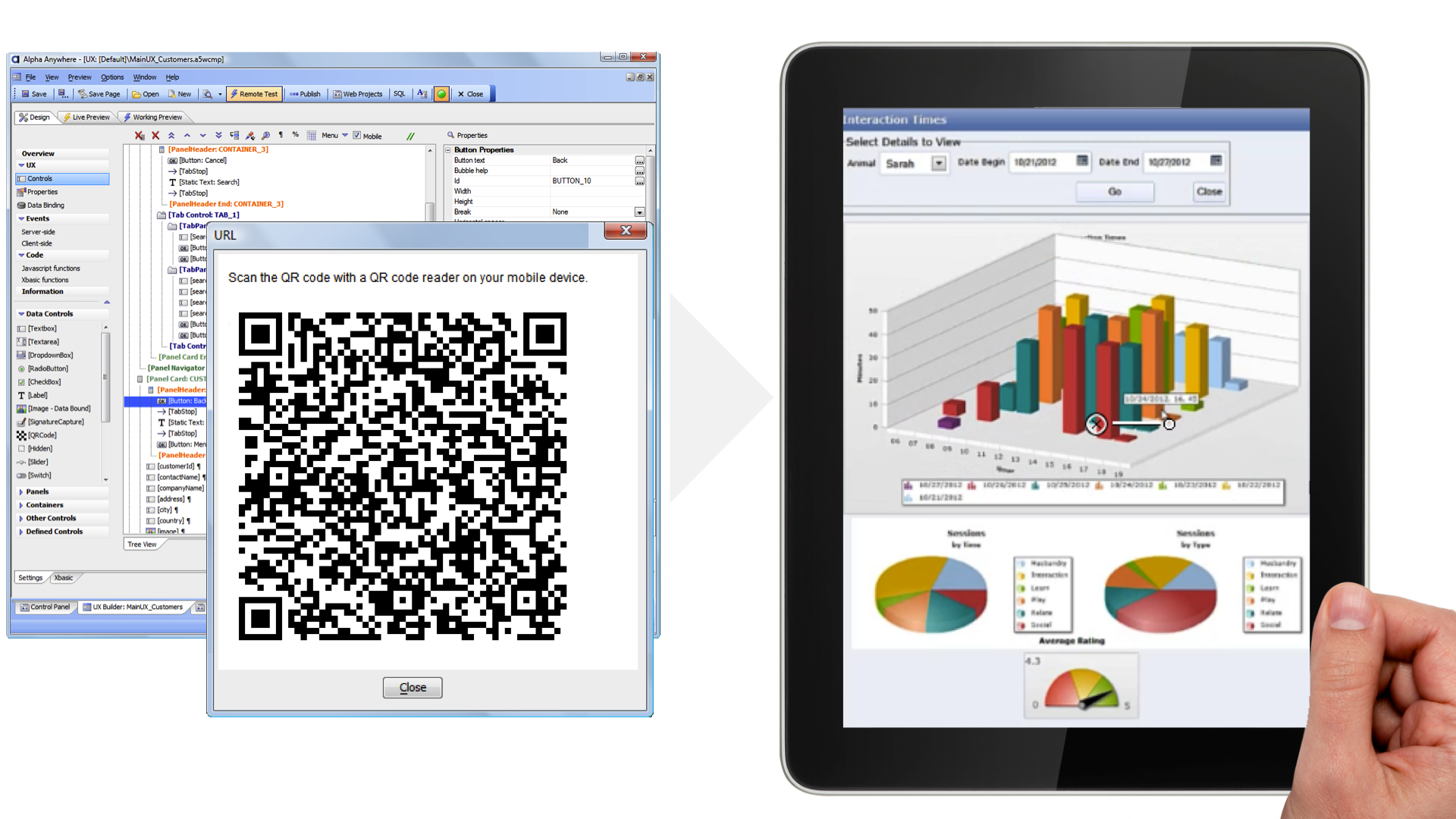 General-purpose low-code platforms like Alpha Software’s provide environments for building enterprise mobile and Web apps with less coding, but with the option for developers to add custom code when needed. By controlling both the front and back ends, these environments can manage customer-facing requirements from different stages of the development process.

McCormick pointed out some of the benefits of low-code platforms for developers:
• Productivity: “Systems can be developed and deployed in the fraction of time vs. coding-heavy approaches.”
• Responsiveness: “The developer can use one codebase to run an app on a range of smartphones, tablets and the Web.”
• Reliability: “The deployed systems can be updated more rapidly on a range of platforms, increasing their reliability and stability.”
• Time and Cost Savings: “Developers can generate more functionality in a shorter period of time, adding business value in needing fewer coders to achieve the same result.”
• Focus on High-Value Development: “By focusing on what the app does, not the how, developers can focus on the functionality and user experience vs. routine code. Developers can also process and respond to user feedback more quickly to adjust and improve apps.”

Low code’s impact on agile
In the post-PC era, low-code solutions are making companies more agile without increasing workloads or time to deliver software. Development teams are building and deploying apps that respond to a business’ customer-facing needs in real-time. Yet going forward, the growing application development practice still faces plenty of hurdles. McCormick sees offline capabilities for mobile business apps as a major challenge, as well as the continued evolution of cloud-based apps.

“We see cloud-based, cohesive environments as another next big step for low code,” he said. “This means doing the heavy lifting for developers by managing the data and state information for multiple devices on the back end so that the end user has a wonderful experience no matter what platform they are on.”

As the low-code space itself continues to evolve, Forrester projects a more diverse platform landscape to serve mounting enterprise needs for multiple simultaneous low-code solutions fueling agile development and delivery. As a result, bigger players could soon enter the low-code market as it scales to match the fast-expanding number of intuitive customer-facing applications.

“Right now, the low-code platform space is dominated by smaller emerging vendors,” said Forrester’s Richardson. “However, we expect larger more established players, such as IBM and Pegasystems, to begin positioning new offerings that address this space and will help give the use case even more credibility from an enterprise perspective. We hear the imperative for low-code loud and clear. But they are also trying to balance the speed-vs.-scale challenge. That is the part that we still have to drill deeper into.”