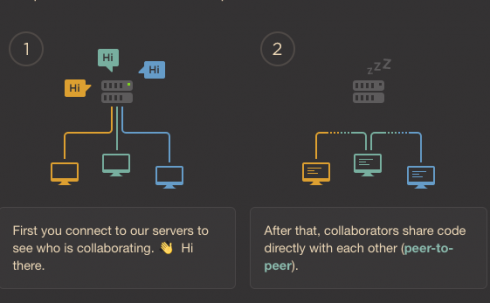 GitHub wants to make coding together as easy as it is to code alone. The company announced a new text editor for Atom, Teletype. Atom is the company’s hackable text editor. Teletype enables developers to collaborate in real time within Atom.

“Writing code with another programmer is a great way to absorb knowledge, challenge yourself with new perspectives, and ultimately write better software. It can also be a fulfilling way to get to know the mind of another human being. Unfortunately, the logistics of writing code with another programmer can be such a hassle that many people don’t bother,” Nathan Sobo, an Atom team member, wrote in a post.

According to GitHub, code collaboration is hard for remote teams who can’t share the same physical machine, cloud-based IDEs that require teams to move their workflow to a hosted environment, and connection latency limitations.

“At the dawn of computing, teletypes were used to create a real-time circuit between two machines so that anything typed on one machine appeared at the other end immediately. Following in these electro-mechanical footsteps, Teletype for Atom wires the keystrokes of remote collaborators directly into your programming environment, enabling conflict-free, low-latency collaborative editing for any file you can open in Atom,” Sobo wrote.