IBM developer Force-pushes a droid around the office 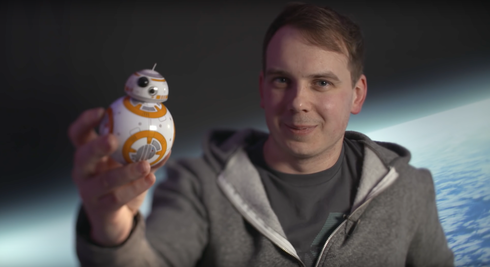 While this may not be the droid you’re looking for, it’s certainly worth taking a gander at. An IBM employee has used the company’s Node-RED and Bluemix Internet of Things tools to add mental controls to a Sphero BB-8 robotic toy.

Joshua Carr, lead developer at IBM working on Internet of Things projects, decided a while ago that he would like to be able to control things with his mind a la the Force. To that end, he ordered the latest version of the Emotiv brain-wave scanning headset to go with a brand new Sphero BB-8.

“I got the [Emotiv] headset and had no idea what to expect,” he said. “Fortunately, the SDK that comes with the headset has a series of language support for things like Android and iOS. There were a few good examples that came with the SDK, such as reading emotions.”

Figuring out the Emotiv took about a day, said Carr. “I spent two to 2.5 hours reading the documentation to work out how to use the to pull and push commands,” he said. “I attached a Java IoT library and created an MQTT client that started pushing to my private instance. [Programming the Emotiv] was probably the hardest thing because I hadn’t done it before. It was harder than the IoT cloud stuff.”

The Emotiv also required some brain training on Carr’s part since mind-based interface devices take a lot of getting used to. “One of the interesting things that came up: Kids can train it a lot quicker than me. I think it’s because they believe in make believe, or maybe because my mind is always thinking of 100 things at once,” he said.

Using his setup, Carr can drive the BB-8 away from him, then have it roll back on command, all by using the power of his brain.

Because this is an IBM project, Watson has to get in on the fun, too. “I want to give my BB-8 a personality,” said Carr. “I can base BB-8’s personality off my Twitter stream, or off the BB-8 Twitter stream. We can do it inside Node-RED with the Watson Node. We use Watson Personality Insight, and do sentiment analysis in real time. If I send out a tweet and am happy, then BB-8 is happy. If I am sad, BB-8 is sad as well.”