Motor City: a board game that teaches the principles of Kanban 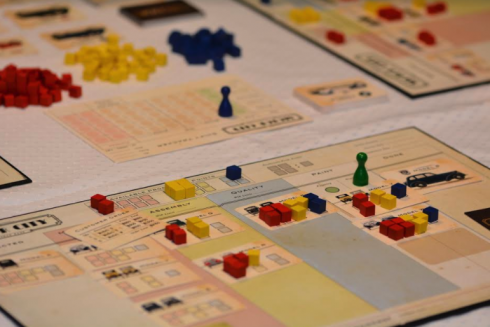 Board games are as popular as ever these days and while they are fun to play, they can also hold educational value in the field of software development. There are lots of board games that teach the concepts of programming, such as Robot Turtles or RoboRally.

John Yorke, product owner and former agile coach at Asynchrony Labs, an IT consulting firm, has taken the concept of educational board games to the next level with his new game called Motor City. This game features many elements of the Kanban methodology and was originally designed for use in training courses.

He took some inspiration from Eliyahu Goldratt’s book “The Goal” and also added in Kanban concepts, he explained.

The game is all about fulfilling customer orders in the era of 1930s/1940s cars. Players can pick an order and decide which cars to build, which he compares to picking Destination Tickets in the popular board game, Ticket to Ride. Throughout the game players follow their car through the production line, and certain orders in your factory will have different constraints that you will need to account for. Some cars will flow through the factory easily, while others may get stuck.

“You’re learning the principles of Kanban and at the same time you’re understanding the principle of constraints and how you adapt your flow to code with those constraints, and it’s all wrapped up in a fun game,” Yorke explained.

The winner of the game is the player that can complete the most customer orders. Yorke says this is true to the world of software development, where he says it’s important to deliver value to your customers. “You understand that you win the game by delivering value to your customers, and producing things that aren’t needed is waste, just like being inefficient in the way you work through things in your work is waste,” he says.

The game took about a year to get to where it is now, and it has already been used in several training sessions. Yorke has attended 4-5 conferences this year where he has done a talk on the game and then played through it.

The game is mostly being marketed to businesses wishing to use it for training, as the price point of $120 is currently a bit too high for a casual gamer. Yorke hopes that the game is successful enough to warrant mass-producing it so they can bring the price down and have it be more accessible.

Yorke’s experience in programming helped him design the game. Throughout the design stage Yorke and his team did a lot of play testing and had to get rid of things that didn’t work well.

“You could say in a programming sense there’s a lot of refactoring that goes on,” he said. “You don’t want to lose the heart of what you’re trying to get to, but there are certain things that work and certain things that don’t work. And you have to be prepared to throw away things that you put a lot of effort into, which is always hard, especially with programming where you get tied to your code and you’re not comfortable throwing it away. It’s a very iterative process, that’s for sure.”

Though the game design process is never true to the Kanban process, especially the more complex a game is, the principles of Kanban will shine through during game play.

Don’t do Agile, be Agile