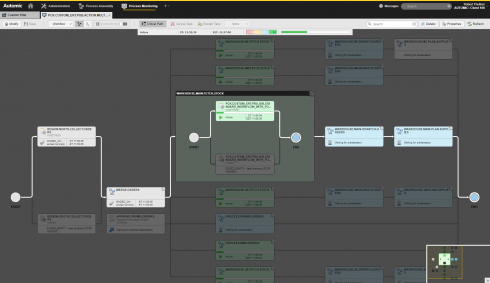 CA Technologies today released version 12.2 of its CA Automic One Automation platform with a focus on making the tools within the suite more developer-centric.

Updates were made to the CA Automic Workload Automation, Continuous Delivery Automation and Automic Service Orchestration components of the platform.

With the updates, “We allow developers to define a workflow or continuous delivery pipeline without having to leave their development environment,” Gwyn Clay, VP of product management for CA Automation, told SD Times today. “Developers can interact with the systems from a code perspective, while operations can interact via the visual workbench with operations processes and business processes.” This is done via automation-as-code features that let developers work on customer experience rather than operational tasks, the company said in a statement announcing the release.

In the announcement, the company wrote: “CA’s Automation portfolio equips IT organizations with the tools they need to move from opportunistic to systemic automation, responding to customer needs by unifying automation silos and driving automation across core business processes. The portfolio [is] built on a foundation of intelligent automation that supports systems to undertake more complex tasks, apply better awareness and understand the underlying business context to deliver accurate and efficient decision-making.”

The platform, Clay said, has been enhanced to enable enterprises to automate the software delivery process, bringing the work of developers and operations together. “Synchronization capabilities allow developers and operations to sync definitions of workflows that relate to back-end processes, or a workflow that represents a continuous delivery pipeline, and store them in a standard code repository, with the advantages of versioning, branching, merge and compare, and making global changes.”

CA Technologies acquired Automic in January 2017, Clay said, adding that this is the second major release since the acquisition. What drove the new features, he said, is the evolving roles of developers and operations. “The personas are starting to get closer together. A lot of the people moving into operations have a stronger developer pedigree than they ever did. With DevOps, there’s an automation-first mentality. People want to automate at greater levels of detail than previous generations could. As part of that journey, what’s important is to give developers as close to a developer-like feeling with the products that are built. Instead of having developers come to you, you come to the developers.”

The company said the update does give operations teams new capabilities for managing the life cycle of automation artifacts, intelligent critical-path management and support for PostgreSQL.

Addressing the issue of whether developers are being pushed too far into operations, or that operations teams are being marginalized in this evolution, Clay said: “Pendulums always tend to swing too far and tend to find their equilibrium. Through the early successes in DevOps, and greater levels of speed and delivery, it has resulted in that pendulum swinging a little too far to the left. Businesses that have more sensitive core processes, things like security and data privacy as a broad concern, there will always be an ops persona. But it needs to evolve closer to the dev persona.”