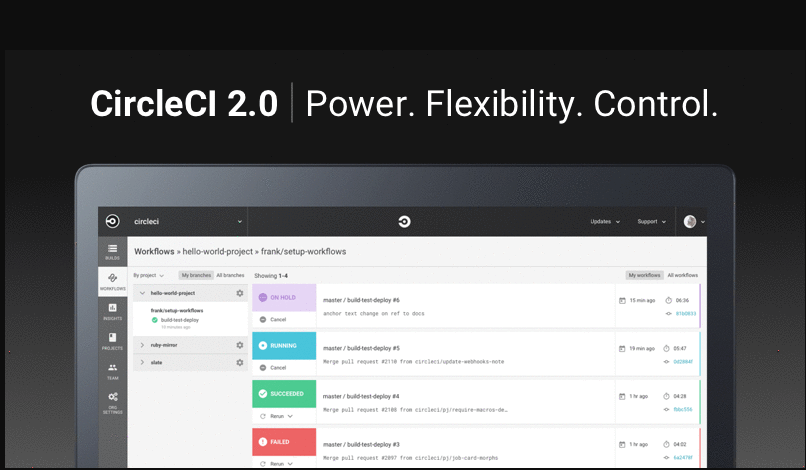 CircleCI 2.0 is officially out of beta and available for developers and teams to push code faster, with more flexibility and control. CircleCI 2.0 comes with the ability to run CI/CD without limits, use workflows to run build-test-deploy stages as individual jobs, and it comes with a redesigned build engine.

“Over 5+ years and 65M+ builds, we’ve learned a lot about how the most effective engineering teams work. They commit early and often, and get validation on new ideas immediately. They can spot problems quickly and fix them even faster. Implementing CI/CD frees teams to ship better software faster and individual devs to push code and innovate without fear,” wrote Jim Rose, CEO at CircleCI, in a blog post.

“Application agility and, more broadly, digital transformation has become not just a goal, but a necessary change for many enterprises across the world thanks in no small part to rapidly changing customer needs and competitive demands. Linux containers and cloud-native applications are helping to fuel these transformations,” said Ashesh Badani, vice president and general manager for OpenShift at Red Hat. “Red Hat OpenShift Online enables organizations to accelerate the path to production for their container-based applications by giving developers the ability to quickly begin new development projects and easily bring them into production in the enterprise.”

Linux Foundation to provide free Kubernetes course
The Linux Foundation is teaming up with the Cloud Native Computing Foundation and edK.org to provide a free introduction to Kubernetes Course. The course, LFS158x, is a massive open online course that will go over Kubernetes’ basic concepts, system architecture, problems it solves, and the model for handling containerized deployments.

“Containers have taken the technology sector by storm, and with increasing adoption comes an expanding need for qualified individuals to manage them,” said edX CEO and MIT Professor Anant Agarwal. “We are excited to partner once again with The Linux Foundation to increase access to quality container orchestration training in a flexible way that is open to people around the world. This in-demand course will provide countless learners with the building blocks they need to launch or advance a career in this growing field.”