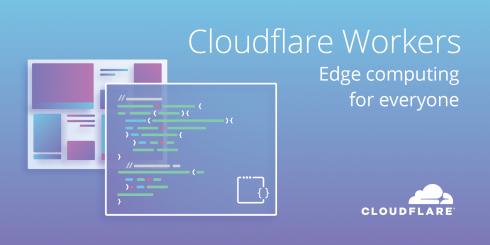 Cloudflare has announced a new solution for developers to deploy and execute code at the edge. Edge devices provide an entry point to an enterprise’s core network. Edge devices include routers, routing switches and integrated access devices. Cloudflare Workers enables developers to execute JavaScript code at the edge with the benefits of a cloud data center and distributed system.

“Cloudflare Workers derive their name from Web Workers, and more specifically Service Workers, the W3C standard API for scripts that run in the background in a web browser and intercept HTTP requests. Cloudflare Workers are written against the same standard API, but run on Cloudflare’s servers, not in a browser,” Kenton Varda, systems engineer for Cloudflare, wrote in a post.

According to the company, before Cloudflare Workers, developers were only able to deploy code on the front end of a end user’s device or the back end of a central data center. This causes complexity when trying to update the code on a user’s device and limits power and bandwidth.

“By bridging the front end and back end with a third place to develop code, we’re excited Cloudflare Workers will empower a new class of applications that were previously impossible,” said Matthew Prince, co-founder and CEO of Cloudflare.

Cloudflare Workers is completely programmable so developers can deploy custom JavaScript code at the edge, provides the ability to scale, and features a serverless architecture to avoid single point of failures. Additional features include backwards compatibility with legacy static configuration languages and ability to push updates without having to wait for end users to update their apps.

In addition, the company announced a new partnership this week with IBM to bring continuous security to applications. Together, the companies are working towards the launch of IBM Cloud Internet Services. This new solution will provide a set of edge network services to protect and secure websites, apps and APIs from DDoS attacks, bot abuse, and data theft. It will also work to  address performance challenges such as app availability and internet app and mobile speed.

“By collaborating with Cloudflare, IBM will provide a one-stop shop for security and performance capabilities designed to protect public-facing web content and apps. IBM Cloud Internet Services help manage content and apps being accessed by a variety of device types all around the world, while ensuring users can access that content quickly and easily and protect against malicious visitors,” Nataraj Nagaratnam, CTO of IBM Cloud Security, wrote in a post.