Forrester: Cloud market is entering the second wave of adoption 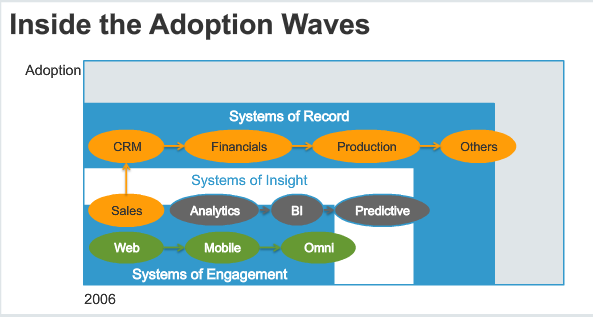 We are moving into a second wave of cloud adoption, according to new findings from Forrester Research. John Rymer, principal analysts at Forrester, presented his findings from a recent cloud market study commissioned by IBM at the IBM Relay 2015 conference yesterday.

According to the findings, public cloud adoption is on the rise, and it is expanding to more areas. Rymer believed the first wave started in 2006, when the first major public cloud platform appeared, and was driven by Systems of Engagement such as Web and mobile applications.

The second wave is being powered by an expansion of analytics, such as real-time insights and the Internet of Things, and the main driving force behind this is customers, according to Rymer. Businesses want to know how to engage with their customers, where to keep data from transactional information, and so they are continuing to invest in systems of engagement, and are starting to more heavily invest in systems of insight (analytics, business intelligence and predictive analytics) and systems of records (sales, CRM, financials and production), he said.

“When you are wondering where to get started and where to get value, your peers are finding value by focusing on their customers,” he said. “This is what we all ought to be doing as our top priorities. It is applying technology [and] analytics to understand, win, serve and retain our customers better than we have before. It all starts with the customer.”

Why are customers and customer-focused IT so important for enterprises and cloud adoption? According to the survey, it’s about speed, Continuous Integration, and continuous improvement. “When you are applying technology to win, serve and retain customers, you are actually in a tussle with your customers,” said Rymer. “They’ve got tools, they’ve got information, they’ve got immediate access to all kinds of insight that puts them in a very powerful position relative to you, and so they move very quickly and taste changes at a dime…so you need to constantly be producing better insights, updates to your apps, new apps and new campaigns.”

In addition to rapid speed and delivery, enterprises are also using the cloud to scale and manage a common pool of resources; maintain control of data security, privacy, app reliability and performance; reduce the cost of software projects; and reduce the costs of IT operations, according to the survey.

The survey also reported private and internal clouds are going to play a greater role in enterprise cloud strategies over the next two years.

For those wondering when to get started in the cloud, Rymer believes the time is now. “If you haven’t started yet [or] if you are early in your adoption, this is extremely good news because it means that there are a lot of people out there, a lot of pioneers out there that haven taken arrows in their backs,” he said. “There is a lot of expertise available to help create a strategy, implement a strategy and start really using the cloud.”

The study surveyed 200 IT leaders in the U.S., Europe and Latin America. More information is available here.

“This is the next platform for all of us,” Rymer said. “The hard work here is really organizing ourselves and designing our own transformation to take advantage of the benefits that cloud offers.”