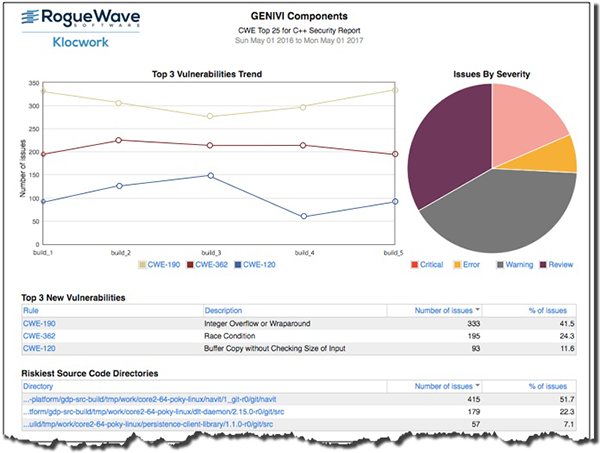 In order for teams to spot security problems and vulnerabilities in their code, Rogue Wave is updating its static code analysis tool with a new security report, new Java checkers, extensive updates to its CERT taxonomy, and more.

Rogue Wave’s Klocwork 2017.1 is the company’s latest release, and it introduces a new built-in graphical security report outlining the top three vulnerabilities, as well as the hotspots for where these issues occur.

According to the company, these reports are “ideal” for including in project status reports to management or stakeholders. Teams can create security reports based on the most popular security rules, including CWE Top 25, CERT-C, DISA-STIG, and others.

Other recent features that were introduced by Klocwork include its SmartRank feature, which lets developers prioritize their issues and select the defects they want to work on first. It also gives developers a recommendation on which issues should be looked at first, providing the most valuable issues at the top of SmartRank’s list.

In addition to these updates, Rogue Wave upgraded its analysis engine. The latest development includes improved tracking of numeric intervals for symbolic expressions. A number of algorithmic improvements were made to the engine as well.