So says Andrew Hathaway, the 18-year-old software engineer from Leeds, U.K., who started the head-to-head online programming arena known as CodeFightClub. In less than a week since its launch, CodeFightClub has signed up more than 100 users via Twitter logins, and they’ve started seven “fights” thus far.

The project, which draws not-to-subtle inspiration from a certain cult film and Chuck Palahniuk novel, was sparked by a fleeting idea to give young coders a fun, competitive atmosphere to hone their skills.

“CodeFightClub was one of those ideas that comes to you whilst you’re trying to get to sleep at night. I had to grab my phone quickly before I fell asleep and forgot it,” said Hathaway. “Quite recently a lot of my friends have either been getting into development, or trying to become the best developers they can. One of the most common questions between developers is ‘Can I write this any better?’ or ‘Is this fast and efficient?’ and to help developers learn what they can do to write better code, I created CodeFightClub.”

The concept is pretty simple. Users can start a “fight” in 84 programming languages and templating syntaxes, and the two fighters “trade blows” in the form of writing code blocks back and forth. Rather than one fighter knocking the other to the floor of some dingy basement, crowd votes and comments decide the fight’s victor.

“The current process starts with a user posting two blocks of code in the same language, a title and a description,” Hathaway explained. “After this, it’s up to the community to vote which contender they most prefer and comment with their reasons why.

“The comments are the key part to learning on CodeFightClub. When a user explains why they prefer a certain contender and what they could do to make it even better, [this will] help fellow developers to think differently in the future and therefore become well-versed.”

So far, he has tallied 73 votes and 18 comments across the seven fights, which range from JavaScript, PHP and Scala to C# and CSS. The fight below, a simple snippet showdown in C#, has turned into a bloodbath, with the fighter on the right winning 24 votes to 1. 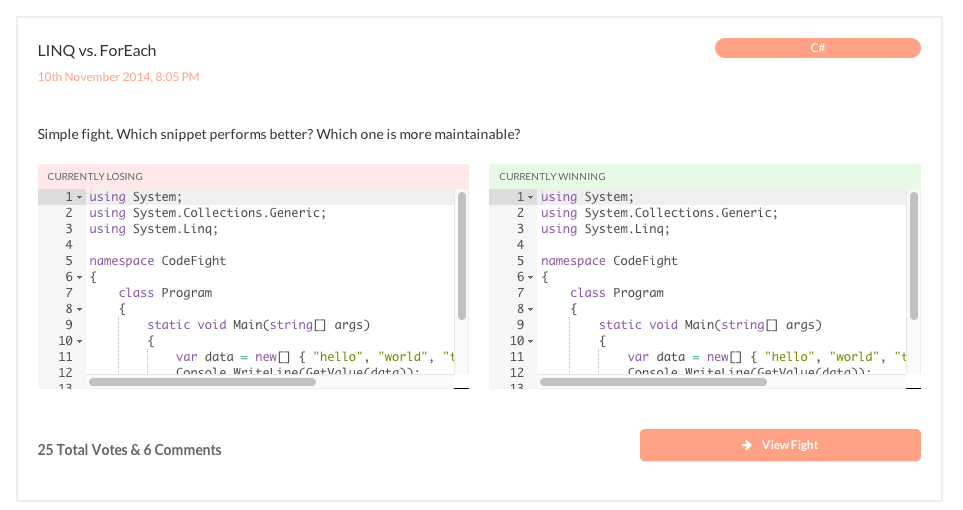 Introducing Tyler
Hathaway built the simple coding arena with the Express.js Web application framework for Node.js. He also chose a PostgreSQL database, which he preferred over a MongoDB and Mongoose combination because “it’s a very mature database with none of MySQL’s weird idiosyncrasies.” For the real-time views showing code fighters duking it out, he employed React.js.

The current version of the site is basic, he said, but Hathaway plans to implement a backlog of features and changes in the near future. He also works full-time as a software engineer at digital search and SEO company Branded3, and has his hands full with several other open-source and freelance projects.

Hathaway has been coding since age 12, when he started building Windows utilities in Visual Basic 6, and has since worked in C#, CSS, HTML and .NET. He has also passed Britain’s GCSE secondary school examinations, and he hopes to launch a startup of his own down the road.

As for CodeFightClub, the creator has Tyler Durden-like hopes of the community taking on a life of its own… without the descent into Project Mayhem.

“The community is definitely something I’m hoping to grow with CodeFightClub,” Hathaway said. “The idea that someone could post two ideas and get a good discussion going and a fair winner at the end pretty quickly. My main goal is to build a community where people are helpful toward each other, share their knowledge and look forward to helping out their fellow developers.”

Hathaway is Jack’s complete and utter surprise. He’s been floored by the immediate response to what began as a passion project. CodeFightClub isn’t about winning or losing, but even Hathaway is somewhat taken aback at the voracity with which programmers have jumped at the chance to metaphorically pummel the daylights out of each other.

“If I’m honest, I never really thought the CodeFightClub would even go this far, but it’s had some great reviews and responses from the development community,” he said. “I have no idea where it will go; I guess it’s up to the community to help me grow the club and keep up the momentum we’ve managed to kick off with.

“As for seeing myself like the Narrator, Tyler Durden, or any of the other characters, I’d have to say no. I hope not anyway—I’m not one to pick a fight!”