For ISVs, customer data is driving decisions on features and user experience

Feature prioritization and user experience are the top two ways Independent Software Vendors (ISVs) find customer data most useful, according to the results of a recent survey on ISVs data trends. 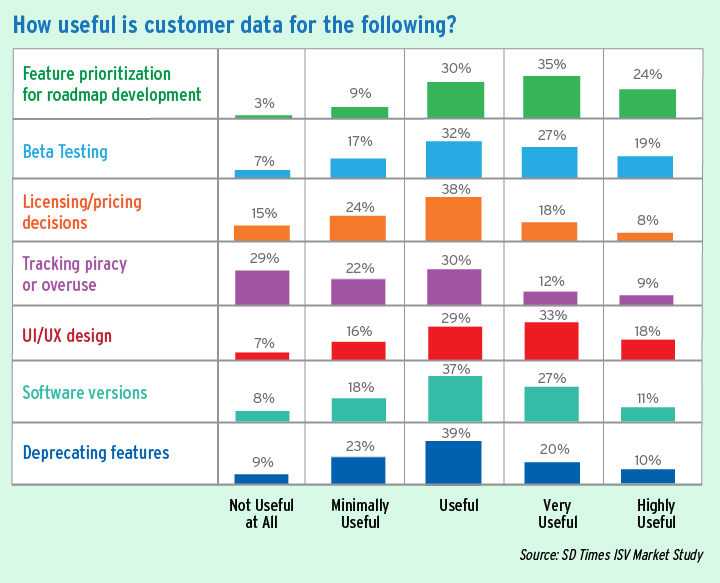 Also, about 80 percent of ISVs responding reported that the data they receive regarding the user interface and overall experience is useful, with nearly 18 percent calling it “highly useful.”

Beta testing was the third highest-ranking use for customer data in the survey, with nearly 78 percent of respondents indicating so. Almost 19 percent said it was “highly useful.”

Other areas of customer data usefulness, in order of ranking in the survey, were tracking versions of software in use, with nearly 75 percent saying so; feature deprecation (69.11 percent); in licensing/pricing decisions (63.44) and tracking piracy or overuse (50.74).

“The results clearly show that ISVs are listening to the users of their software to make important decisions about future product features and the overall experience of their software,” said David Lyman, CEO of D2 Emerge and publisher of SD Times. “The fact that they can iterate quickly and get near-instant feedback on their releases makes customer data all the more important in their decision-making process.” 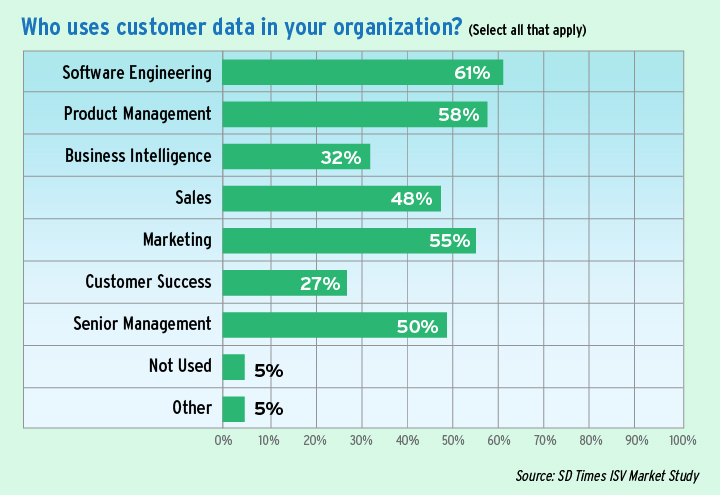 As important ISVs responding to the survey indicated that software engineering is mostly like to use customer data in their organizations, at 61.2 percent, followed by product management (58 percent),  marketing (55.2), senior management (49.1) and sales (47.7).

Still, with as useful as customer data is to see if their software is being used, how it’s being used, and what customers want in subsequent releases, the survey revealed that 64.5 percent of respondents spend half or less of their time analyzing that data.

For those that are collecting and analyzing user data, 37 percent said they are building their own solutions, while 20.5 percent say they use usage analytics software, and another 17 percent say they don’t have a tool and have no plans to implement one.