Report: Companies are slow to make transition to SAP S/4HANA 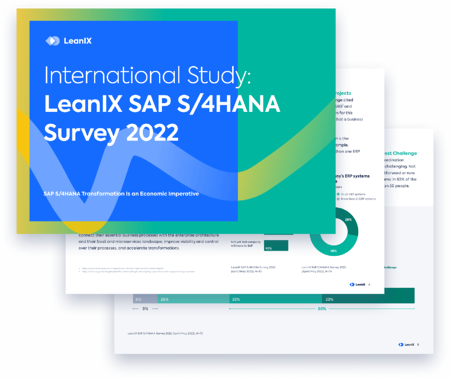 Only a small portion of SAP users have finished making the transition to SAP S/4HANA, which is a version of SAP based on the HANA database, introduced in 2015. According to LeanIX, SAP S/4HANA redefines ERP systems and is the most notable SAP update since 1992 with the introduction of SAP R/3.

Twelve percent of respondents to LeanIX’s SAP S/4HANA 2022 Survey said they have finished the transformation process. The survey gathered responses from 100 IT professionals in April and May of this year.

SAP will be ending support for SAP ECC (also known as SAP ERP) in 2027, which is one of the reasons companies are needing to migrate, LeanIX explained.

Fifty-four percent of the respondents view this move as a business transformation rather than a standard technical upgrade. Key skill sets crucial to this process include enterprise architect management and business process modeling.

About half of respondents identified two main challenges they face during transformation. One challenge is identifying interdependencies in their ERP and non-ERP landscapes. Another is defining a target architecture. Fewer than 20% of survey respondents said they are able to establish an overview of their software landscape within a month, and LeanIX says this is likely a factor in these two challenges.

Ultimately though, the biggest obstacle for two thirds of respondents is lack of collaboration. The transformation to SAP S/4HANA requires alignment between business, project, and IT teams.

“Time is running out for organizations that plan on moving to SAP S/4HANA,” said André Christ, CEO and co-founder of LeanIX. “With only a third of those surveyed saying they will complete their transformation within the planned time frame, organizations need to focus on actions that will accelerate the process. Enabling effective collaboration between business, project, and IT teams is the critical step they need to take. This will not only speed things up, but will also ensure that the transformation delivers lasting business value.”

Value Stream Management: The practice that finally unites business and IT