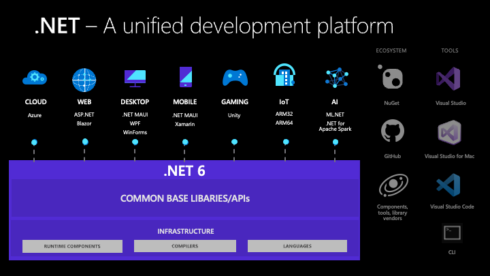 Microsoft today announced two major releases: .NET 6 and Visual Studio 2022. Both releases have been long awaited and are the result of over a year of development effort.

.NET 6 is a Long-term Support release, which means it will be supported for three years. Microsoft is recommending developers start to migrate their apps to this new version, and believes that the upgrade process is fairly simple from both .NET Core 3.1 and .NET 5.

New features in .NET 6 include:

More information on the latest features in .NET 6 is available here. .NET 6 is supported in Visual Studio 2022, which also was released today.

According to Microsoft, the two main themes of Visual Studio 2022 are developer productivity and quality-of-life improvements.

It includes IntelliCode, which is an AI-assisted tool that can complete whole lines of code and spot repeated edits and suggest similar fixes throughout the codebase.

This release is the first 64-bit version of Visual Studio, which allows it to leverage more modern hardware and reliably scale to more complex projects.