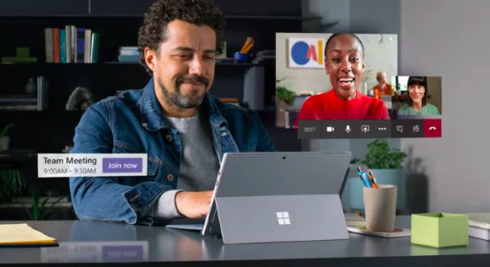 As we face the global pandemic that is among us, businesses and organizations have of course accelerated their remote work and collaboration efforts. One of those ways to communicate, collaborate and connect seamlessly as a team is with Microsoft Teams.

Microsoft Teams recently celebrated its third anniversary and in doing so, released some new, innovative features that are ideal for remote workers to help them become more productive during this COVID-19 outbreak.

While working remotely is obviously much different than interacting within the same building at a corporate headquarters, where people can engage in face-to-face dialogue, at this time, organizations are doing their best to maintain connectivity by engaging in professional, online meetings. With this third anniversary edition, Microsoft Teams is enhancing and adding new capabilities to build the best online meeting experience to help users succeed from a remote location.

Let’s explore some of the new capabilities which have already rolled out, along with some new ones which are scheduled to be available later this year.

Avoid background distraction — While attending a Teams meeting from any location, the “user with background blur” feature can keep the focus on themselves without worrying about background movement.

Minimize background noise — Many of us, while working from home or a remote location, can sometimes face noise issues in the background and are unable to clearly understand what is being said in online meetings, which can inhibit concentration. Microsoft Teams has arrived at a solution with real-time noise suppression features to minimize distracting background noise and to improve our ability to clearly hear what’s being said.

Easy participation in large meetings — The new “raise hands” feature in Microsoft Teams meetings makes it easier for attendees to actively participate in large meetings. Attendees can send a visual signal when they have something to say, and everyone in the conference will see a visual cue on the attendee’s video feed, as well as in the participant list. This will give an attendee the room to more actively participate in the current conversation.

Quickly reach a group all at once — Microsoft Teams allows creating a tag to categorize people based on attributes such as role, project, skill, or location. Tagging people helps the user notify a group of people all at once by @mentioning a tag in a chat or in any standard channel of the team without having to type every single name. Anyone who has been given that tag will receive a notification as they would if they were personally marked by @.

Automatic creation of an org-wide team — For small to medium-sized businesses, and for organization-wide collaboration purposes, Office 365 global admin can easily create a public group that automatically pulls in every user in the organization, and keeps the membership up-to-date with active directory whenever a user joins or leaves the organization.

Pop-out chat windows for easy chat switching — For smooth movement between ongoing conversations, Microsoft Teams will now allow the user to pop out individual chat conversations into a separate window.

Several other new features are planned in the near future. Let’s take a look at what’s currently scheduled to be coming to Microsoft Teams.

Microsoft Teams continues to expand its functionality to meet the needs of users in all roles and across industries, enabling work continuity during challenging times. There’s no debating the fact that “Work from Home” (WFH) is made much easier by using Microsoft Teams.

Microsoft Teams allow you to quickly connect with teammates and be more productive from home as well. To ensure success, you’ll also want to consistently evaluate available technology options as they become available, and act quickly and efficiently consider them for support to truly empower your distributed teams and remote workforce.

Kamal is a principal at Advaiya. Kamal has extensive experience in complex systems delivery, and infrastructure, security, architecture and IT strategy.

View all posts by Kamal Paliwal