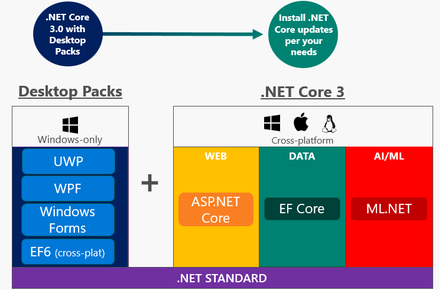 .NET Core Preview 6 is now available on Windows, macOS and Linux. The preview includes updates for compiling assemblies for improved startup, optimizing applications for size with linker and EventPipe improvements, according to Microsoft.

Also, the WPF team explained it has now published most of its WPF codebase to GitHub since the company acquired GitHub late last year.

“We are now getting very close to being feature complete for .NET Core 3.0, and are now transitioning the focus of the team to the quality of the release,” Richard Lander, the program manager at .NET team, wrote in a blog post.

“As Kintone is ‘Mission Control’ for many of our clients, we understand that they need access to their data and critical operations no matter when or where they are,” said Dave Landa, CEO of Kintone. “Our new mobile app supports the growing need for workplace flexibility to work anytime, anywhere.

Personally identifiable information (PII) was by far the biggest target, comprising a whopping 97% of all data breaches.

This year doesn’t look optimistic as the report also found that with the $6.2 billion in cyberattack damage on financial services in Q1 2019 alone was drastically higher than the $8 million in damages from the same quarter last year.

Together, the companies will now enable joint product integration by infusing Automation Anywhere bots into Azure, as well as co-selling and joint marketing to benefit mutual customers.

“The combination of Automation Anywhere and Microsoft Azure creates an intelligent digital workplace, where software bots operate with maximum efficiency and accuracy enabling enterprises to unlock the value of intelligent automation in the cloud,” said Frank Della Rosa, the IDC research director of SaaS and cloud software.