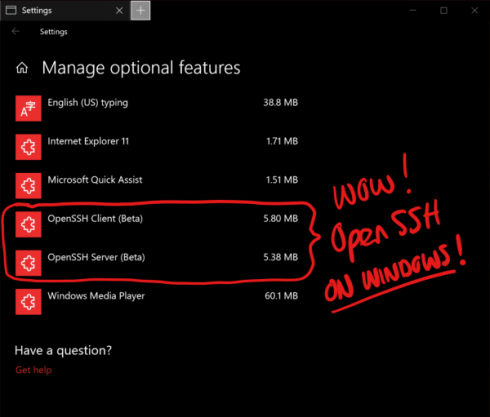 Microsoft has announced a beta release of the OpenSSH client and server for Windows 10 Insider builds and Windows Server. “SSH is one of the most important tools in the *NIX world, through which users communicate with shells, applications, and services running on remote machines, devices, VM’s and containers. Windows users most often remotely access Windows machines, devices, VM’s and Containers via the amazingly powerful Remote Desktop Protocol (RDP) which, as the name says, remotes the entire Windows UX,” Rich Turner, senior PM at Microsoft, wrote in a post.

Open SSH was added so that developers don’t have to turn to third party solutions if they want to utilize SSH in remote machines. OpenSSH will be helpful in those cases where developers only want access to the command line and don’t want to load up the entire UX, according to Turner.

GitLab 10.4 is released
GitLab 10.4 has been released and includes improvements to planning, testing, merge requests, and deployment. It also includes new security testing tools as well as a web IDE, which makes contributing changes easier. A full list of features can be found here.

Apple updates ARKit in iOS 11.3
Apple is introducing new augmented reality experiences in the latest preview of iOS 11.3. iOS 11.3 is expected in the spring. It will feature ARKit 1.5, which is designed to give developers more tools for developing AR apps. ARKit will now be able to recognize and place virtual objects on vertical surfaces as well as horizontal surfaces. It can also integrate 2D images into AR experiences using computer vision techniques.

“The Codefresh CLI opens up a lot of possibilities for working with pipelines and images. Since Codefresh is multi-tenancy by default, you can even switch contexts between accounts as needed! We’re excited to see what you build,” the Codefresh team wrote in a post.