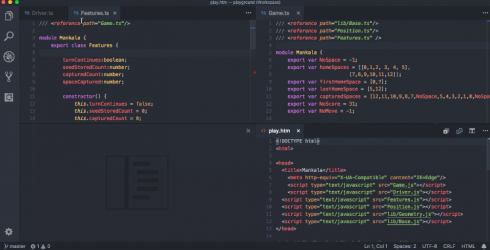 The June 2018 release of Visual Studio Code has been announced, with a number of new features.

The Workbench now features a grid editor layout that allows developers to arrange editors vertically and horizontally and display more than three editors side by side.

The Outline view mode has moved out of preview and is now enabled by default. Outline view shows the symbol tree of the editor that is currently in use and features different Sort By modes, optional cursor tracking, and supports open gestures. It also has an input box, which will find and filter symbols as they are typed.

Portable Mode is now supported, which allows developers to easily move VS Code setups across environments because all data created and maintained by VS Code is located near the installation.

The latest VS Code release introduces the ability to drag and drop files, folders, and VS Code workspace files to open them. It also adds a more natural way of navigating input history.

This version features performance improvements for the Integrated Terminal. The parser was completely rewritten for enhanced ANSI compliance and the rate at which incoming data is processed has increased by about 30 percent. Prior to this release, by default, the terminal converted bold text to the bright color variant, but now developers will be able to turn this feature off.

After reviewing user feedback that the floating toolbar in the debugger should always be visible, it “unchained” the toolbar, allowing it to be dragged to the editor area. According to the team, this should be useful for developers that use editor tabs heavily, but also want to always see the debug toolbar.