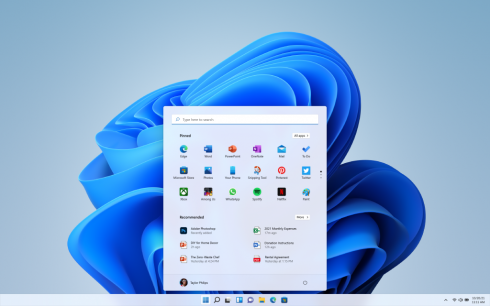 After weeks of dealing with leaks of its upcoming operating system, Microsoft officially announced Windows 11 at an online event this morning.

With Windows 11, Microsoft set out to create a more personal user experience, with new ways to be productive and connect with people. The upgrade will start being available for eligible Windows 10 PCs late this year.

“These last 18 months have shown us quite a bit and the PC has played a role to help each one of us, whether it’s work or learning or connecting with each other,” Panos Panay, chief product officer for Windows + Devices at Microsoft, said during the event. “You might be doing emails, you might be having meetings, you might be having classes on your PC. For some it’s become the office banter place, for others it’s become where you do your happy hours. For me it’s where I’ve done pizza parties with my team, it’s where my daughter graduated, and for many it’s where they celebrated their holidays. During that time we learned something, not just how functional and practical the PC needs to be — and believe me we understand that and we know the responsibility of that more than we have before — but it also must be personal, and maybe most importantly, it must feel emotional.”

Visually, it has redesigned the Start menu, added updated transitions, updated the design of Settings, and added new themes.  The Start menu now appears in the center of the screen and is now more personalized, making suggestions on what to open, based on a user’s commonly used apps or recent files.

Windows 11 will also add Widgets, which is a personalized, AI-powered feed. “Today, we often pick up our phones to check the news, weather or notifications. Now, you can open a similarly curated view directly from your desktop. When you open your personalized feed it slides across your screen like a sheet of glass so it doesn’t disrupt what you’re doing,” Panay wrote in a blog post.

Windows 11 will also come with Microsoft Teams preinstalled and pinned to the taskbar. Users will be able to treat it more like Apple’s Facetime and start video calls right from their desktop.

“Now you can instantly connect through text, chat, voice or video with all of your personal contacts, anywhere, no matter the platform or device they’re on, across Windows, Android or iOS. If the person you’re connecting to on the other end hasn’t downloaded the Teams app, you can still connect with them via two-way SMS,” Panay wrote.

It also redesigned the Microsoft Store and will be adding support for Android apps through an upcoming partnership with the Amazon Appstore and Intel Bridge.

It is also making it easier for developers to bring their apps to the Microsoft Store. Developers will now be able to bring apps, whether they’re built as a Win32, Progressive Web App (PWA), Universal Windows App (UWP), or other app framework.

Microsoft has also changed its revenue share policy so that developers can bring their own commerce system into their apps and keep 100% of the revenue, where previously they only kept 85%.

Snap Groups will remember which apps are grouped together and pins them to the taskbar.

Also, when a user disconnects their laptop from their monitor, it will automatically minimize the windows that were open, and when they reconnect, it remembers the layout that they had when they were connected to the monitor before. “With Snap Groups and the new docking experience, it’s easier than to get back to being your most productive,” said Carmen Zlateff, partner director of Windows User Experience, during the event.

Users will also be able to create separate desktops that display a different set of windows and applications. For example, a user could put all their work windows in one desktop and personal windows in another. Each desktop can also have its own wallpaper. “Desktops are an easy way to help you stay organized and focused. They’re different expressions of you designed for the different parts of your life,” said Zlateff.