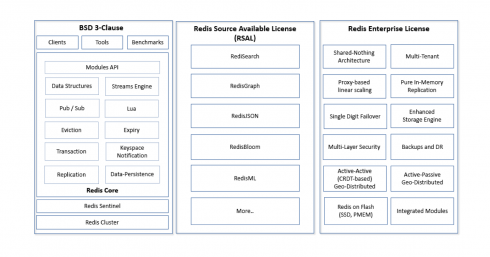 In response to the negative reaction to its move to a Commons Clause licensing model, Redis Labs today is introducing the Redis Source Available License (RSAL) for Redis Modules. Redis Modules are add-ons to the Redis database.

Last year, the company caused a lot of controversy and confusion when it included the Commons Clause with its licenses. This led a lot of the open-source community to pronounce Redis Labs’ open-source project proprietary software because it did not meet the Open Source Initiative’s (OSI) definition of open source. The OSI is a non-profit organization dedicated to the promotion of open source. If a software license. If a particular license is not OSI-approved the majority of the open-source community will not consider any software using that license truly open sourced.

The Commons Clause was created as a way to protect smaller open-source driven companies against technology giants and cloud providers taking advantage of projects for their own monetary gain without contributing to the project or community itself. But because of the nature of the clause and the restrictions it adds to existing open-source licenses, a majority of the open-source community believed it directly violated the idea of open source. According to the OSI, a license must not restrict users from using the program.

Since Redis Labs announced it was moving its Redis Modules from AGPL to Apache2 modified with the Commons Clause, a number of other companies have developed their own solutions to the problem. For instance, MongoDB created the Server Side Public License for its open-source software (the license is under review by the OSI), and Confluent announced the Confluent Community License. As a result, Redis Labs decided to rethink the way it was handling the situation.

“Each company took a different approach, but all shared the same goal — stopping cloud providers from taking successful open-source projects that were developed by others, packaging them into proprietary services, and using their monopoly power to generate significant revenue streams,” Yiftach Shoolman, co-founder and CTO of Redis Labs, wrote in a post. “During this period, we also received honest feedback from multiple users about how we could further improve our license to favor developers’ needs.”

Based on the feedback, the company found the Apache2 modified by Commons Clause approach caused too much confusion, the clause’s language lacked clarity, and the restrictions worked against the company’s original intention to grow its ecosystem.

RSAL was designed to address these issues. “RSAL grants equivalent rights to permissive open-source licenses for the vast majority of users,” Shoolman wrote. “With RSAL, developers can use the software; modify the source code; integrate it with an application; and use, distribute or sell their application. The only restriction is that the application cannot be a database, a caching engine, a stream processing engine, a search engine, an indexing engine or an ML/DL/AI serving engine,” Shoolman wrote.

Additionally, the company notes that this will have no impact on the Redis core license, “which is and will always be licensed under the 3-Clause-BSD,” the company explained.  and it will not be limiting the functionality of open-source Redis by moving its core components to closed source. The company has not announced plans to submit the RSAL for OSI approval. “Although the source code is available under RSAL, according to the Open Source Initiative (OSI), an open source license cannot include limitations. Therefore, certain restrictions imposed by RSAL mean that any software under this license is not open source by definition. However, in practice, RSAL is very similar to permissive open-source licenses, and only restricts cloud providers from gaining commercial benefit from software that was not developed by them,” Redis Labs wrote in a description of the license.

“This open approach sometimes works against our commercial interest, since the cloud providers don’t have to do much in order to offer a viable Redis service. But we have a much bigger vision of helping modern applications provide instant experiences to their users,” Shoolman added.  “We believe those cloud providers that build the right collaboration infrastructure will be the ones that eventually benefit the most from open-source projects.”