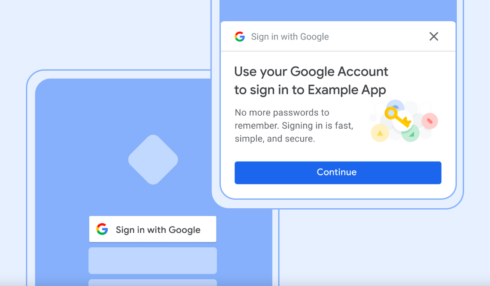 Google is trying to make authentication easier and safer for developers by introducing new features to the Google Identity Services (GIS) library.

“For developers, our focus has always been to offer a frictionless experience that makes it easier for users to onboard and return to partner platforms, while also helping developers create a trusted relationship with their users,” Gina Biernacki, product manager at Google, wrote in a blog post.

On Android, it is adding a new capability that can allow developers to request that users provide a verified phone number that is associated with their Google account when they are signing up for a service. According to Google, developers have shared that SMS verification is quite costly, and with the number already being verified by Google, this should decrease overall costs associated with SMS.

Android developers will also be able to request a user’s phone number through the Phone Number Hint API. This API allows users to share their number directly from their SIM card and have developers access it.

Google prefers that developers switch to this API over the native Android API because it doesn’t require additional permissions, which cuts down on time and costs. The company also clarified that users don’t need to be signed into their Google account and the API doesn’t store any information to the Google account.

For web, one new update is the introduction of GIS One Tap on Intelligent Tracking Prevention (ITP) browsers, which are browsers that restrict the use of third party cookies. GIS One Tap is now available on Safari, Firefox, and Chrome on iOS. It will be rolled out by default to all developers who have enabled One Tap on October 12, 2022.

According to Google, benefits of One Tap include increased user conversion, industry leading security, reduced risks associated with password management, the ability to sign people in without redirecting them to a dedicated sign in page, and mitigation of duplicate accounts with personalized prompts and automatic sign-in on subsequent visits.

Features that will be deprecated shortly include Smart Lock for Passwords and Google Sign-In for Websites.

“We are excited to see these new features continue to bring measurable value to both our developers and users, and look forward to continuing supporting our developers with their identity-related needs,” Biernacki wrote.