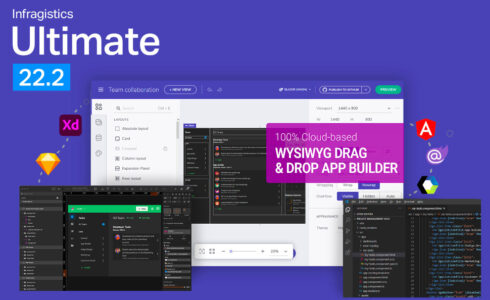 The design company Infragistics has announced the latest release of its UX and UI platform. Infragistics Ultimate 22.2 introduces a new set of Blazor data grids and high speed RAD development through the App Builder.

“Blazor is huge for .NET developers, and with Ultimate 22.2, our new Blazor grids exceed anything available on the market today. Feature complete data grids with full column and row-level virtualization means .NET developers are not limited in what they can deliver in their modern .NET web apps,” said Jason Beres, SVP of developer tools at Infragistics. “Couple that with our commitment to web standards in our one-of-a-kind Web Components product, plus the RAD development capabilities in our low-code WYSIWYG App Builder, developers have everything they need to deliver error-free apps in any platform, 8x faster than hand coding.”

There are four new data grids being released: Data Grid, Tree Grid, Hierarchical Grid, and Pivot Grid. It hopes the addition of these grids will cover every scenario for application development.

This release also adds a number of updates to charts, including automatic responsive layouts, enhanced rendering for rounded labels, and automatica crosshair, animations, and Y-Axis labels and label formatting.

A new API has also been added for grouping, sorting, and summarizing category string and numeric values. This will eliminate the need to calculate chart data manually.

Other features include full support for Figma in Indigo.Design and support for Angular 14 in Ignite UI Angular.