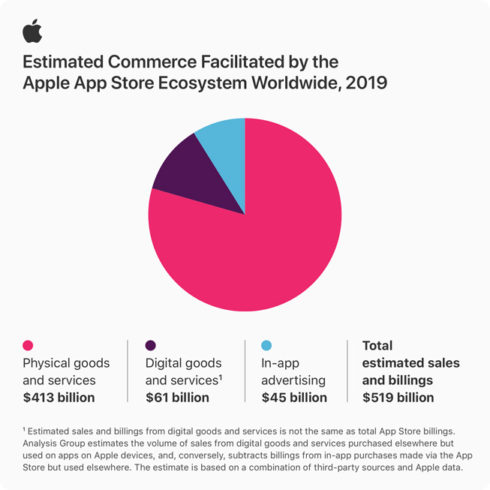 The Apple AppStore ecosystem report was conducted by independent researchers at Analysis Group.

According to the report, the highest value categories were mobile commerce (m-commerce) apps, digital goods and services apps, and in-app advertising.

“As a result of social distancing protocols associated with COVID-19, individuals have changed the way they live their lives and are spending more time on their mobile devices,” Apple stated in a post.

Nearly 80% of the money came from physical goods and services. Within that category, retail was the largest (this includes brick-and-mortar stores with the exception of grocery stores), comprising about half of the $519 billion in transactions.

Other types of m-commerce apps with the largest sources of sales from physical goods and services included:

Meanwhile, the sale of digital goods comprised close to 12% of the money that was transacted. Games were the biggest in this category, which also included  apps for music and video streaming, fitness, education, ebooks and audiobooks, news and magazines, and dating services.

Because Apple only receives a commission from the billings associated with digital goods and services, more than 85% of the $519 billion total accrues solely to third-party developers and businesses of all sizes, the company explained.

In-app advertising sales accounted for $45 billion, and of that, 44% was derived from games.

“In a challenging and unsettled time, the App Store provides enduring opportunities for entrepreneurship, health and well-being, education, and job creation, helping people adapt quickly to a changing world,” said Tim Cook, the CEO of Apple. “We’re committed to doing even more to support and nurture the global App Store community — from one-developer shops in nearly every country to businesses that employ thousands of workers — as it continues to foster innovation, create jobs, and propel economic growth for the future.”