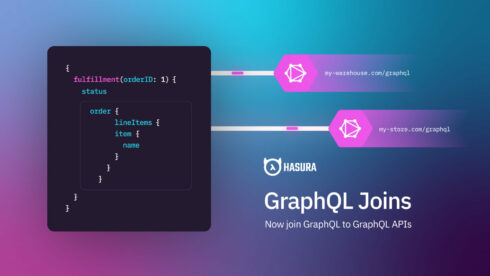 GraphQL company Hasura has announced a new capability that will let developers join data from different GraphQL services. This new GraphQL Joins feature can be used to create a unified GraphQL API.

According to the company, this feature builds on Hasura’s existing data federation capabilities. It also gives them the ability to mix and match data sources, which will reduce development time, security risks, and ongoing maintenance costs.

Hasura explained that it’s important that developers have the ability to compose data from different sources. Even though data is coming from different places, usually it is semantically related.

Previously, building relationships between this related data has required custom code where multiple APIs call each of the sources. GraphQL Joins provides a single schema that lets developers query, mutate, or federate data without having to write custom code.

GraphQL Joins is best suited for developers who have more than one GraphQL API, existing investment in GraphQL servers, and databases for which they haven’t already created APIs.

“We are extremely pleased to be able to offer developers the ability to access all of their data with one API, regardless of the source, enabling them to focus solely on creating the best possible user experience,” said Tanmai Gopal, CEO of Hasura. “These new data federation innovations build on our commitment to make GraphQL available to all, and significantly advance both unification of data in development and proliferation of open standards.”