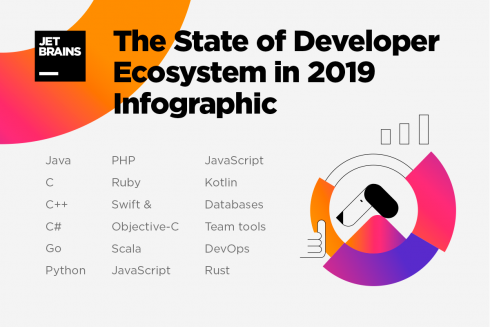 JavaScript and Java continue to dominate the software development world as the top programming languages, but newly released reports indicate the times are changing. JetBrains released its State of Developer Ecosystem 2019 report, which found while Java is still the most popular primary language and JavaScript is the most used overall, Python is gaining speed.

Compared to other recent language reports and analysis, TIOBE found Python had surpassed C++ and entered the top three programming languages in its TIOBE Index, and Stack Overflow’s developer report found Python was the fastest-growing major language and the second most-loved language. Additionally, Stack Overflow reported Python is the most wanted language among developers.

“For the seventh year in a row, JavaScript is the most commonly used programming language, but Python has risen in the ranks again. This year, Python just edged out Java in overall ranking, much like it surpassed C# last year and PHP the year before,” Stack Overflow wrote in its analysis.

TIOBE also predicts Python will surpass Java as the top language in the next couple of years.

The top use cases developers are using Python for include data analysis, web development, machine learning and writing automation scripts, according to the JetBrains report. More developers are also beginning to move over to Python 3, with 9 out of 10 developers using the current version.

The JetBrains report also found while Go is still a young language, it is the most promising programming language. “Go started out with a share of 8% in 2017 and now it has reached 18%. In addition, the biggest number of developers (13%) chose Go as a language they would like to adopt or migrate to,” the report stated. Compared to Stack Overflow’s survey, Go was the third most-wanted programming language behind Python and JavaScript.

Other key findings from JetBrains’ State of Developer Ecosystem included: