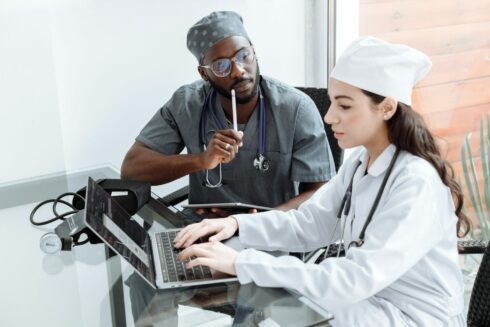 There’s a movement afoot among startups in the healthcare space to tear down silos of information that hinder efficient and effective care, as well as reduce frustration for patients who have to deal with insurance, pre-authorizations for treatment, and even scheduling tests and appointments.

One of those startups is a company called Olive, which has an Olive Helps platform that allows developers to create applications — Olive calls them Loops — to address many of these inefficiencies.

Sean Lane, the founder of Olive, recognized that healthcare systems were not connected and thus were unable to communicate with each other or share crucial patient information. So the company was started with the goal of creating the “Internet of Healthcare.” Patrick Jones, executive vice president of partnerships at Olive, said the idea is to bring healthcare “out of the dark ages of using paper, disconnected machines, and humans as routers, and instead enabling use of software and technology to solve healthcare’s biggest challenges.”

With the lofty goal of removing trillions of dollars from the cost of healthcare, Jones said the company is building out AI workers to handle the mundane paperwork humans do now, and enabling a developer ecosystem to provide support for human workers in the form of AI co-workers.

Robin Lai, senior product manager at Olive Helps, said the reason they chose the term ‘Loops’ for their apps is because they create feedback loops with end users. “Loops act as an AI co-worker, working alongside a human. An action on the user’s computer is detected through the Loop’s sensors, which triggers the Loop – giving the human worker information that’s relevant to them at that point in time (a Whisper). Then the user can provide feedback back to the Loop to know, ‘Is this the right information?’ “

When Olive Helps launched in June, it started with very simple Loops to provide diagnosis codes or procedure codes. Now the company wants to extend that to more developers, leveraging Olive Helps as an ‘app store’ for these healthcare-related Loops, Lai explained.  The possibilities for creating and delivering impactful Loops are endless. Some, which Lai called dictionary Loops, give users the ability to look up and understand healthcare-related diagnosis and procedure codes. One of Olive’s partners is working on Loops for patient intake, where the patient can fill out the forms they’re usually handed upon arrival in a medical office ahead of time, and the office can use the same Loop to look up what the patient has populated in the form. There also is a newsfeed Loop that provides a daily digest of news in healthcare. “There’s quite a bit of potential,” she said.

One of Olive’s partners is Circulo Health, which is developing Loops to detect when a patient is out of network, among others. That startup, according to Colton Brugger, senior engineer at Circulo Health, is working to disrupt the health insurance market with an eye on the Medicaid payer market.

Circulo partnered with Olive Helps to use the platform as “our main way to present Circulo and its capabilities to the world,” Brugger said. Circulo has already created four Loops and has plans for a dozen more, he added. Circulo’s Loops will enable providers to check claim statuses, patient’s eligibility and benefits, and more. Circulo plans to create numerous internal technologies and Loops that will help to break down the silos of information that create frustration and inefficiencies for all parties involved.

Beyond the forms and claims workflows, Circulo also is developing Loops addressing the social factors that impact health, Brugger said. “We have launched Food Access and Housing Access Loops in the Loop Library. Later this quarter, we plan to add Loops with employment and transportation resources,” he said. “These Loops combined will offer a powerful suite of information around the social determinants of health. If patients appear to be at risk in any of these categories, providers will have great resources available to them right alongside any other tools they’re using within Olive Helps. This is just one class of information we’re trying to bring together” in the Olive Helps platform.

He went on to say it’s not just about providing a kind of a search capability, but letting medical professionals send patient data home with the patient, through SMS messaging. “Messaging with patients is going to be an important part of bringing great care coordination capabilities to our suite of Circulo Loops. We’re excited to offer an opportunity for providers to connect directly with their patients even in these first Loops we’re putting in the Library,” Brugger said.

For developers looking to contribute and commercialize healthcare-related Loops, Olive has created an LDK — a Loop Development Kit — and has a VS Code extension that comes with some templates and boilerplate built in, Lai said. “The LDK offers aptitudes — that’s what we call the capabilities within the LDK. If you wanted to, for example, make a network call to your API, you can use the network aptitude to send a request and get a response back from your APIs. You can select from the available aptitudes in our LDK , easily creating a pre-baked Loop that you can then modify.”

Jones sees a future where software and technology assist humans to be more effective, and not, for example, have to wait for access to a particular data set before they can perform their task.

He went on to describe what he called “death by pilot” in healthcare, where systems are siloed and slow-moving, with security and privacy policies in place that make it hard for innovators to take an initial pilot and reach customers because they’re bogged down in testing and rollout phrases.

So with Olive Helps, Jones said the company is “democratizing the ability for individual developers, as well as startups and enterprise companies, to be able to bring their solutions into healthcare. We’re going out and getting the install base, ranging all the way from the largest health systems in the United States, down to independent physician practices. One of the key value props for our developers is access to that distribution network.”