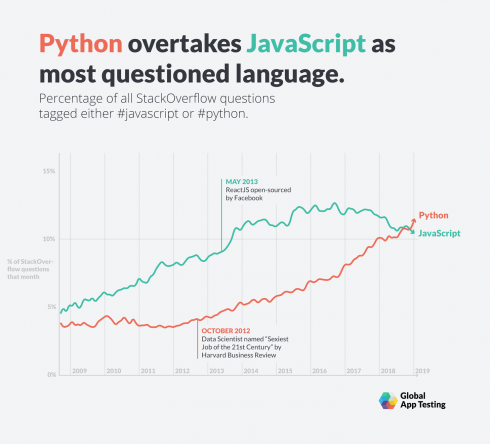 Stack Overflow has been helping developers solve all sorts of programming problems for over a decade. According to Global App Testing, millions of development questions have been asked on the website since its creation.

The company believes that JavaScript tops the list because it has such a wide range of use cases. “If you work in any way with the internet, chances are you’ll need to know a bit of JavaScript,” Global App Testing wrote.

The JavaScript topic with the most questions was jQuery, a popular JavaScript framework.

However, if you look at the data over time, Python is becoming the most questioned language. And as of this year, it has surpassed JavaScript in terms of questions asked. “Either Python is fast becoming the most popular programming language, or Python just has a bigger proportion of new coders compared to other languages,” the company wrote.

Python is frequently used by data scientists, and some of its frequent questions are related to data processing libraries, such as “pandas” and “dataframe.”

Python is also a fairly general-purpose language and is involved in many areas of development, which explains the popularity of searches around the Django web development framework, Global App Testing explained.

“Each programming language has over time been geared toward — or was even designed for — a particular niche within tech. R is to data science as Swift is to iOS development as C++ is to video game development. This explains some of the differences in the types of problems that arise. This explains why we see “database” a commonly questioned concept in SQL but not, for example, Objective-C,” the company said.