Report: 50% of companies don’t have a plan for Python 2 EOL 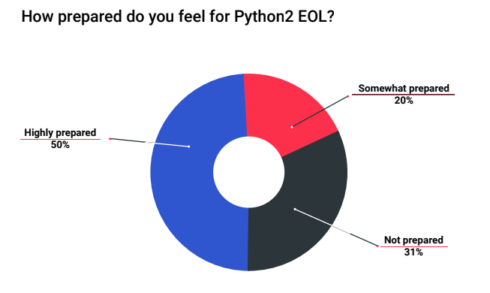 Python 2 finally reached end of life (EOL) at the start of 2020. Python 2 EOL means that version of the language will no longer receive any sort of updates, including security updates.

“We need to sunset Python 2 so we can help Python users by improving Python faster,” the Python Software Foundation wrote on their website. “We released Python 2.0 in 2000. We realized a few years later that we needed to make big changes to improve Python. So in 2006, we started Python 3.0. Many people did not upgrade, and we did not want to hurt them. So, for many years, we have kept improving and publishing both Python 2 and Python 3. But this makes it hard to improve Python. There are improvements Python 2 can’t handle. And we have less time to work on making Python 3 better and faster.”

The Python Software Foundation had initially planned to sunset Python 2 in 2015, but pushed the EOL data back because many people still hadn’t upgraded in 2014. The day has finally come, however, where Python 2 has been sunsetted. ActiveState recently surveyed 1,250 developers to get a better understanding of how companies were preparing for EOL.

RELATED CONTENT:
Top unicorns herd to Python
Python 2 to sunset by 2020
A pledge to Python 3

Moving forward, a majority of respondents (60%) are planning to or have already migrated their applications to Python 3. Of the remainder, 10% have no plan, 9% don’t know what the plan is, 7% plan to support Python 2 apps themselves, 5% plan to sunset their apps, 2% plan to rewrite in a different language, and 1% plan to purchase commercial support.

Companies will face a lot of challenges when it comes to migrating to Python 3. The biggest challenge companies expect to face is finding replacement packages, with 54% of respondents being concerned about it. Other challenges include testing (40%), converting Python 2 to 3 (37%), supporting Python 2 apps (25%), learning Python 3 (20%), and managing customer expectations (18%).