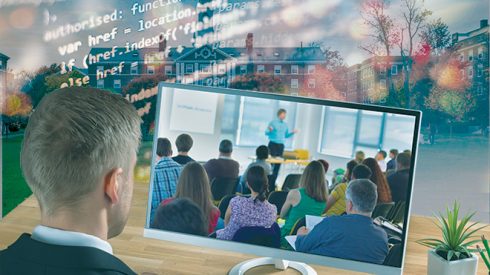 “There’s a growing awareness that the half-life of any technology skill is about two to three years. Even if you are a skilled developer, [if] you don’t reskill and learn more, it’s hard to stay relevant,” said Leah Belsky, vice president of enterprise at Coursera, a massive open online course (MOOC).

RELATED CONTENT: Bootcamps and MOOCs are picking up STEAM

Luckily, there are many ways to do so. Bootcamps, college courses, conference training, in-house consulting and courses are just some ways to go about reskilling the workforce.

Some of these educational methods can tailor specifically to companies and their goals and reskill their workforce accordingly.

“Through a massive consumer database we have insight into what skills are trending and what competitors of companies and specific industries are investing in and how their employees are learning and performing,” Belsky said. “We’re now working on options for companies to actually offer their own content.”

The speed of reskilling is one of the top priorities for companies, which will need to look toward implementing training programs that can more quickly retool the labor force rather than toward multi-year degrees, according to the most recent McKinsey Global Institute report on the state of jobs: “Jobs lost, jobs gained: Workforce transitions in a time of automation.”

Software development is still the most in-demand position for tech giants like Amazon, Google, Apple, Microsoft and Oracle, followed by the demand for data analysts, and the demand for these skills is only projected to grow in the near and far future, according to a report by personal career advisor Paysa. Basic knowledge in mobile development is also beneficial as companies are becoming more mobile-focused and need developers to build apps and mobile operating systems.

Despite the notion that automation takeover is not nearly as prevalent in software development as in other fields, developers still need to take advantage of sharpening their skill sets to remain competitive since software changes fast.

“We’re seeing that automation is now a must-have job skill,” said Ken Goetz, Red Hat’s VP of Global Education Services. “We see what’s happening in the larger industry where improving efficiency to enable the move to go up in the hybrid cloud is pushing customers towards needing to have more automation in their infrastructure.”

Ironically, while automation and AI are replacing specific tasks that were always manually driven, they also drive a tremendous demand for employees that have the skills to work with that automation.

“Artificial intelligence is meant to complement and enhance rather than displace human labor,” said Costas Spanos, director of the Center for Information Technology Research in the Interest of Society (CITRIS) and the Banatao Institute, which creates information technology solutions for society’s most pressing tech challenges between the UC campuses.

Some businesses are taking the lead in some areas, providing on-the-job training and opportunities for workers to upgrade their skills, both through in-house training and partnerships with education providers.

One software company that’s reskilling its administrators in-house is Red Hat. Finding that 20 percent of Linux job postings require automation as a core skill was part of the impetus for creating the in-house training program, according to Goetz.

The company announced that it was overhauling its Red Hat Certified Engineer (RHCE) certification to train Linux professionals. The new program is built around acquiring automation skills, mainly using Red Hat Ansible Automation, because it has become such a vital tool for Linux system administrators.

The new course will teach admins how to automate tasks such as provisioning, configuration, application deployment and orchestration in addition to teaching the core Linux skills. They can then install and configure Ansible as well as learn how to prepare managed hosts for automation.

The size, volumes and the efficiencies needed to run a modern data center or to run a modern cloud — whether it’s a public or private cloud — have grown to levels that only automated software can handle.

In the past, developers would have to write shell scripts to program that automation to do a specific set of tasks. This laborious task was a huge problem standing in the way of productivity.

“The problem with that is that you’re basically reinventing the wheel,” said Red Hat’s Goetz. “You’re not taking advantage of where the industry is and the work that others have done and so every time someone goes in and builds to the script they’re building it on their own, and they’re maintaining it on their own. It’s just not scalable.”

To solve that burdensome loop, DevOps teams are increasingly adding automation tools like Ansible to end repetitive tasks, speed productivity and scale all in an easily readable language. Puppet and Chef are similar automation solutions for managing infrastructure and applications.

“Every business right now is trying to think about how they can automate more of what they do and so having a baseline of skill around automation enables these other things to occur in the infrastructure to be able to support that next generation of technologies,” said Goetz.

In addition to automation, the growth of mobile and smart devices and the spread of the IoT have made connected devices commonplace, creating vast datasets that need to be stored and secured and heightening the demand for data science skills such as machine learning and statistical programming, according to the Coursera Global Skills Index 2019.

“People who have the ability to use the latest tools to analyze big data sets are in demand now,” said CITRIS’ Spanos. “Just like using Word, PowerPoint and Excel became a generic skill that everybody needs to know regardless of what they do, data analytics is going to be similarly pervasive. Data science at UC Berkeley is emerging as a huge new movement that is transforming the way we train everybody and not just engineers.”

Currently, there is a significant deficit of people with the skills to work with the vast troves of data, relegating the untapped information to a category called “dark data.”

“I think a lot of the technological problems of data processing are increasingly solved by commercial tools and open source and so it’s not really the processing of the data so much as the understanding of what the data represents and what are some of the biggest barriers to access and to be able to access our data,” said Tim Tully, the CTO of Splunk. “I think a lot of it is it’s just people are collecting data from devices and laptops and servers in the enterprise and are not doing anything with it.”

The top challenges to recovering dark data include the ever-growing data volume and a lack of necessary skill sets and resources, the report found. Ninety-two percent of employees said that they are willing to learn new data skills. Surprisingly, 69 percent responded that they want to continue doing what they’re already doing, regardless of the impact on the business or their career.

“Data wrangling is hard. Disks are getting larger and larger in terms of capacity. What that’s doing is sort of exacerbating the problem with dark data because now we’re getting more granular with the data we collect. Most people consume the data in a dashboard but they don’t actually know where the data came from,” Tully said. “I think the important thing is to make it a priority to understand that this concept of dark data exists and there’s potential data that you can do something with. The other thing is making sense of the data that was collected.”

A recent ActiveState survey titled “2019 Developer Survey: Open Source Runtimes” also found that open-source languages get varying degrees of satisfaction from developers with Python being most satisfying and SQL being the most popular for daily use. Eighty percent of respondents use SQL the most, followed by Javascript at 77 percent and Python at 72 percent.

The rapid evolution of software has created a massive demand for technical workers to work as developers and IT professionals in companies that span all industries.

A 2017 Singlesprout report projected a shortage of 1.1 million STEM workers by 2024. Traditionally, secondary schools and colleges carried the onus of preparing workers for the jobs, but they have been unable to do so quick enough in today’s rapidly changing tech economy.

According to Coursera’s 2019 Global Skills Index, the United States ranks 23rd in the world when it comes to technology. It lags far behind countries that are leading the category such as Finland, Switzerland and Austria which have heavy institutional investment in education via workforce development and public education initiatives, the report explains.

“I think [government] policy has to play a major role in that as well because the free market is not going to get everything right, especially when it comes to mid to late career workers that need to be reskilled. There is a danger that they may be left out,” suggested CITRIS’ Spanos. “So I think that there should be a policy that should first create the appropriate incentives on the appropriate skills.

Meanwhile, the McKinsey report projected that as many as 375 million workers (around 14 percent of the global workforce) might need to switch occupational categories as digitization, automation, and advances in artificial intelligence disrupt the world of work.

A recent research report by the Society for Human Resource Management states that nearly 40 percent of hiring managers cited a lack of technical skills among the reasons why they can’t fill job openings.

One of the largest companies to recently pull out all the stops for reskilling and arming its employees with the technical skills they needed is AT&T.

Early last year, the mobile giant discovered that half of its 250,000 employees lacked the necessary STEM skills to keep the company in the ring against T-Mobile, Verizon and Sprint. Meanwhile, the switch from hardware to cloud-first operations at the company would render the work of 100,000 employees obsolete.

As a response, AT&T invested a billion dollars in retraining its employees. Projections showed that hiring new software and engineering workers would have cost the company significantly more.

“It’s often impossible to find the type of talent you need in the market and the cost of hiring and training can be upwards of 50, 60, 70 thousand dollars and sometimes much more for each new hire,” Coursera’s Belsky said.

Moreover, while high employee turnover creates a fiscal black hole, there are more reasons to avoid escorting employees to the door. Employees uphold the structure and culture of an institution. They know the lingo of the work they do and they know who is who.

Belsky explained that investing in reskilling can motivate the staff with credentials and certificates that can have a lasting impact on their careers and make them engage in their learning. This investment leaves the company executives with a skilled workforce and employees who feel fulfilled: the best of both worlds.