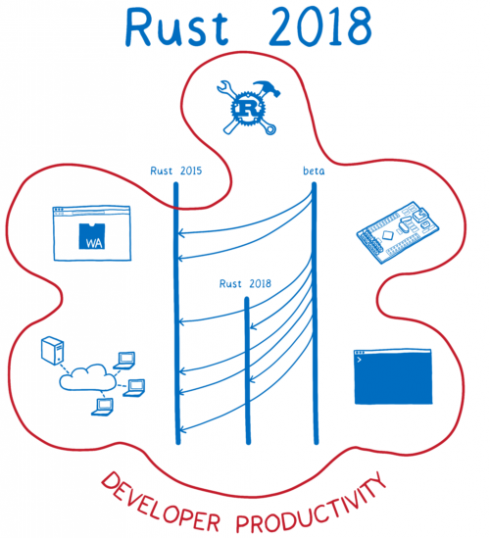 The 2018 version of the language is a culmination of the past three years, according to the team. It includes improvements to tooling, documentation, and domain working groups. The team explained Rust 2015 was focused on stability and Rust 2018 comes with a focus on productivity.

“The idea of editions is to signify major steps in Rust’s evolution, where a collection of new features or idioms, taken as a whole, changes the experience of using Rust. They’re a chance, every few years, to take stock of the work we’ve delivered in six-week increments. To tell a bigger story about where Rust is going. And to ship the whole stack as a polished product,” the team wrote in a post.

Rust 1.31 is the first iteration of the Rust 2018 edition. This release tackles non-lexical lifetimes, module system changes, and the maturity of tool such as Cargo, Rustdoc and Rustup.

With the release of Rust 2018, the team is now starting to look at Rust’s future. The team is asking developers to reflect on what they liked, didn’t like or hoped to see in Rust during the last year, and propose any goals or directions for the upcoming year. Proposals can be set in the form of blogs, GitHub gist or any other writing platform. The team is also looking for posts on ideas for community programs, language features, documentation improvements, ecosystem needs or tooling enhancements.

While the team isn’t committing to any major editions just yet, it has set 2021 as a possible year for the next major update.

“Each edition has had some sort of theme associated with it. As such, we wouldn’t just like to know what you’re thinking for Rust in 2019, but also, what you want the theme of Rust 2021 to be. Ideally, suggestions for Rust in 2019 will fit into the overall goal of the next edition, though of course, three years is a lot of time, and so not every single thing must. As Rust matures, we need to start thinking of ever-longer horizons, and how our current plans fit into those eventual plans,” the team wrote.