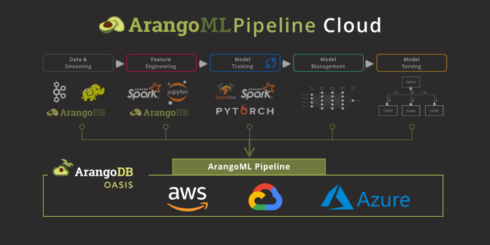 “ArangoML Pipeline Cloud meets the needs of both data scientists, who are concerned with the quality of the data, feature training, and model results, as well as DevOps, who need to manage which datasets and deployments are in use, their performance, and how they are being deployed,” ArangoDB wrote in a post.

ArangoDB can easily accommodate and unite unstructured, highly-interlinked data, such as inference and model descriptions and allow relationships between them to be stored as a graph that can be managed by a DevOps engineer and be used by a data scientist at the same time, the company explained.

Security and data privacy were also big development priorities, so many features and enhancements are geared towards delivering more granular control of private channels and minimizing vulnerabilities, according to the team.

Pandas 1.0 announced
Pandas is a open-source library for easy-to-use Python data structures and data analysis. The new release removed a lot of functionality that was deprecated in previous releases and includes enhancements and new features.

Enhancements include the ability to use Numba in ‘rolling.apply’ and ‘expanding.apply,’ the ability to define custom windows for rolling operations, and creating markdown tables.

Stoplight plans to utilize the funding to augment engineering efforts, accelerate its product roadmap and cover more customer use cases.

“API-first design is becoming a fundamental component of enterprise engineering, and we have full confidence that Stoplight will only deepen their category leadership in the next several years,” said Mike Smerklo, co-founder and managing director of Next Coast Ventures.