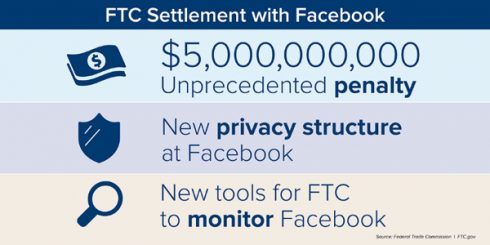 The Electronic Privacy Information Center (EPIC) is challenging the Facebook’s $5 billion settlement with the FTC in court, stating that the settlement is “insufficient to address the concerns originally identified by EPIC and the consumer coalition, as well as those findings established by the Commission.”

“The proposed order wipes Facebook’s slate clean without Facebook even having to admit guilt for its privacy violations,” the group’s complaint said.

EPIC filed a motion to block approval of the settlement, and said that the punishments fail to ensure consumer privacy. A provision within the settlement would give Facebook immunity from any complaints that the company violated a 2011 FTC settlement order and close a federal investigation into whether Facebook violated that settlement.

The 2011 order required Facebook to take several steps to make sure it lives up to its promises in the future, including giving consumers clear and prominent notice and obtaining consumers’ express consent before their information is shared beyond the privacy settings they have established, according to the FTC’s website.

“Our work continues as we now finalize a comprehensive test suite, integrate key game engine support, and plan the next set of features to evolve a truly vibrant, cross-platform standard for XR platforms and devices. Now is the time for software developers to start putting OpenXR to work,” said Brent Insko, OpenXR working group chair and lead XR architect at Intel.

OpenPDF 1.3 now available
OpenPDF 1.3 has been released with new improvements. OpenPDF is a free Java library for creating and editing PDF files with LGPL and MPL open source license.

This includes the modernization of OpenPDF to use more modern Java features, a bugfix check font size before drawing string and fix using Document in try-with-resources functionality.

A neural network learns by continually attempting any task and is graded on whether it performs the task or not, the company explained. Through repetition, a neural network improves its performance based on these grades and can be used in self-driving vehicles to predict how others will behave on the road and plan a car’s next moves. Also, Waymo explained population based training (PBT) is a recent approach that jointly optimized neural network weights and hyperparameters which periodically copies weights of the best performers and mutates hyperparameters during training.

“By incorporating PBT directly into Waymo’s technical infrastructure, researchers from across the company can apply this method with the click of a button, and spend less time tuning their learning rates,” the company wrote in a post.