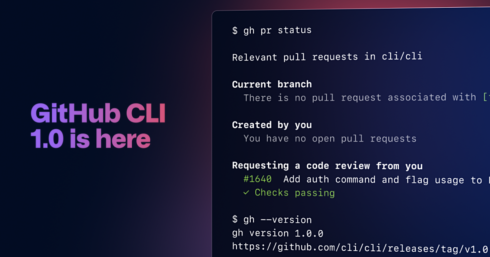 With GitHub CLI 1.0, users can run their entire GitHub workflow from their terminal, call the GitHub API to script nearly action and connect to GitHub Enterprise in addition to GitHub.com.

Google updates Coral accelerator
The update adds the M.2 Accelerator with Dual Edge TPU which was used in Google’s Series One room kits where it helped remove interruptions and made the audio clearer for better video meetings.

“The ability to scale across multiple edge accelerators isn’t limited to only two Edge TPUs. As edge computing expands to local data centers, cell towers, and gateways, multi-Edge TPU configurations will be required to help process increasingly sophisticated ML models,” according to the Google team.

To encourage more developers to build products with Coral Intelligence, Google also dropped the prices on several of its products.

Additional details on the update are available here.

“The Open Mainframe Project is a crucial pillar that intertwines the mainframe industry with the open source community,” said John Mertic, the director of program management for the Linux Foundation. “We depend on our members to suggest new projects while we ensure a vendor-neutral governance that helps breathe new life into traditional technologies like COBOL and CBT Tape. We look forward to continued growth in both the development and use of these technologies.”

“In the intervening period, as we weighed the cost of our overall portfolio and strategic focus, we made the decision not to relaunch the service. Because the service is already offline, no major changes in status are expected,” Mozilla wrote in a blog post.