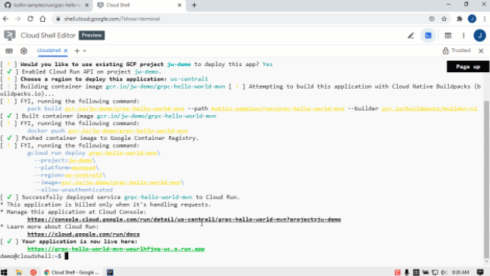 Google has announced version 1.0 of gRPC Kotlin for Android and Cloud. gRPC is an open-source universal RPC framework.

“Kotlin is now the fourth “most loved” programming language with millions of developers using it for Android, server-side / cloud backends, and various other target runtimes. At Google, we’ve been building more of our apps and backends with Kotlin to take advantage of its expressiveness, safety, and excellent support for writing asynchronous code with coroutines,” Google’s software engineer Louis Wasserman and developer advocate James Ward wrote in a blog post.

The project builds on protocol buffers, adds the network protocol, generates clients and server status with the Flow API, and works with Android clients and GraalVM native image clients.

“From day one Cloudflare was built to service developers. Over the last ten years, millions of developers have counted on us for our network performance and security services. With Cloudflare Pages, we’re now providing them with a scalable, fast, secure, cost-effective platform to build next-generation applications that they can deploy globally,” said Matthew Prince, co-founder & CEO of Cloudflare. “Internally, we believe it’s only a matter of time before an individual developer builds a billion-dollar company on their own. We hope Cloudflare Pages will provide the building blocks to help make our belief a reality.”

“Given today’s volatility, many enterprises have either slowed down or paused updates to their applications. However, their customers are relying on them to innovate more now than ever before. The capabilities represented by these patents enable IT organizations to continue to rapidly drive value for their customers while mitigating risk to the business,” said Gaurav Rewari, CTO and GM of VSM at Digital.ai.

Grafana gives users more options with new AWS partnership
AWS and Grafana have teamed up on tha new scalable managed offering called the Amazon Managed Service for Grafana. According to the company, this will enable users to natively run Grafana with other AWS services.

Grafana is also working with AWS on the new Amazon Manager Service for Prometheus, which will compliment this new offering.

“AWS clearly recognizes the strength of our community, and this new offering helps meet the demand from its customers for Grafana. As a company, we want to make sure that Grafana is available wherever and however it makes the most sense for our users. And that, ultimately, is at the heart of our partnership with AWS,” Raj Dutt, CEO and co-founder of Grafana, wrote in a post.