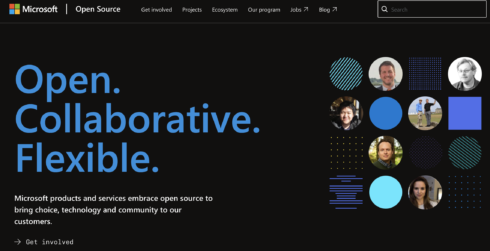 The site also offers near real-time view of things that are happening across Microsoft’s projects on GitHub.

In addition, the site highlights Microsoft’s open-source projects such as Accessibility Insights, PowerToys and Windows Terminal.

Before TFRecorder, users  would have had to write a data pipeline that parsed their structured data, loaded images from storage, and serialized the results into the TFRecord format. Now, TFRecorder allows users to write TFRecords directly from a Pandas dataframe or CSV without writing any complicated code, according to Google in a post.

Data loading performance can be further improved by implementing prefetching and parallel interleave along with using the TFRecord format.

Stackery brings serverless to the Jamstack
Stackery announced that it added the website resource to simplify the build process for static site generators like Gatsby.

This automates a lot of machinery within AWS to retrieve application source and build it with references to external sources, including: AWS Cognito Pools, GraphQL APIs, Aurora MySQL databases, and third-party SaaS services like GraphCMS.

“The combination of JAMstack and serverless allows for powerful, scalable, and relatively secure applications which require very little overhead and low initial cost to build,” Stackery wrote in a post.

It also includes the option to publish to a public or private GitHub repository and to debug within the browser without writing a launch configuration.

Preview features are not ready for release but are functional enough to use, Microsoft wrote in a post that contains additional details on the new release.

Additionally, the use of ‘/sourceDependencies’ is not limited only to C++, it can also be used in translation units compiled as C. The switch is designed to be used with multiple files and scenarios under ‘/MP,’ according to Microsoft in a post.

“C++20 demands a lot more from the ecosystem than ever before. With C++20 Modules on the horizon the compiler needs to work closely with project systems in order to provide rich information for build dependency gathering and making iterative builds faster for inner-loop development,” Microsoft stated.