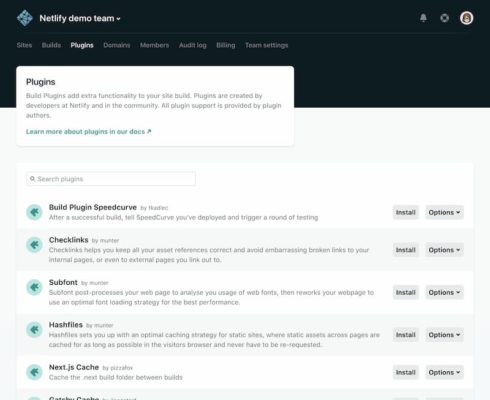 Previously, developers had to set up changes or integrations to the build process by configuring every command to run at build, downloading and validating every dependency, and writing the code to make it all work, the company explained.

Build Plugins are designed to make developers more productive by creating a CI/CD workflow designed for frontend developers, offering plugins reviewed by the Netlify team, enabling the use of an existing plugin or bringing your own, and allowing one-click install from the Netlify UI.

The deeper collaboration, which also includes tighter integration with Visual Studio Code, will allow developers to quickly start new language-specific projects in Node.js, Python, .NET Core/C#,  leverage new functionality around the Compose Specification and streamline how they switch from local development to a serverless cloud container service while remaining in the Docker CLI user interface or from within VS Code, according to Docker.

“This new seamless experience from desktop to cloud means developers can more quickly and easily collaborate and create applications to run in Azure,” said Amanda Silver, the corporate vice president of product for developer tools at Microsoft.

Cloudtamer.io’s continuous cloud compliance
Cloudtamer.io built its platform around three pillars of cloud governance: account management of cloud accounts as well as user/group permissions and abilities inside the software and inside the cloud service providers, budget enforcement, and compliance automation.

“Our compliance dashboard brings the most important information forward to help your security team see the current state of the environment. The dashboard is what your leaders want to see – how is my cloud doing right now,” cloudtamer.io wrote in a post.

The new continuous compliance capability is made up of three core components: the dashboard, the engine, and the API.

“With the increased reliance on digital, it has never been more critical for businesses to scale and optimize DevOps to deliver a frictionless high-quality digital experience. Eggplant’s DAI platform supports continuous intelligent automation that tests from the users’ perspective rather than just code compliance,” Eggplant wrote in a post.

Other new additions to Eggplant’s Digital Automation Intelligence platform include the Business Impact Predictor that uses analytics to drive a visualization that shows users the overlap of common application failure patterns.

New collaboration experience for Telerik Fiddler
Fiddler announced a new Sharing feature which makes sure that Fiddler users solve together and on one workspace rather than on their individual systems.

Users can share their sessions via email, allow users to add comments on specific sessions and add context to their analysis, and will soon allow users to create Workspaces on the cloud and work on shared instances.