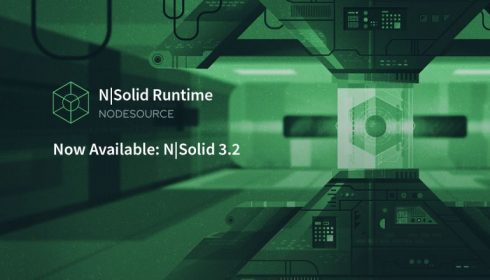 NodeSource has announced the release of its platform for managing, securing and analyzing mission-critical Node.js apps. N|Solid 3.2 features new diagnostic functionality and an improved UI for monitoring and managing large-scale Node.js deployments.

“As our customer base has grown along with the Node.js ecosystem, we saw the need for more powerful monitoring and management functionality in N|Solid, especially at the enterprise level,” said Thomas DeMeo, vice president of product for NodeSource “Among other major enhancements, N|Solid 3.2 delivers a more intuitive, interactive experience that makes working with Node.js applications faster and easier. It also provides more flexibility to explore Node.js metrics that no other tool can expose.”

“More business applications are operating in a hybrid environment, incorporating traditional monolithic applications, wrappered with a new microservice stack, and using native AWS services. It’s now also common to see customers starting to use AWS Lambda Functions for specific microservices as well,” said Mirko Novakovic, Instana CEO. “This level of complexity requires the ability to monitor the whole environment with a single solution that can give DevOps the required observability to see and address problems, no matter where they reside.”

New AWS capabilities include continuous automatic discovery of components, and insight into configuration, performance and health of each platform.

Microsoft has announced new capabilities to the Azure Databricks solution. Azure Databricks is designed to combine the Apache Spark analytics platform with Microsoft Azure. The latest updates include support for GPU enabled virtual machines, and a new runtime for machine learning. The runtime provides a distributed, multi-GPU training of deep learning networks and comes pre-installed and pre-configured.

“This runtime enables developers to build deep learning models with a few lines of code. Previously, developers had to invest considerable time and effort to leverage these toolkits. Now, they no longer have to write their own logic to load data, distribute training code to multiple clusters and validate model accuracy,” Rohan Kumar, corporate vice president of Azure Data, wrote in a post.

Microsoft is one step closer to building and deploying its underwater datacenter. Microsoft announced it has an “experimental, shipping-container-size prototype” processing workloads on the seafloor.

“The deployment of the Northern Isles datacenter at the European Marine Energy Centre marks a milestone in Microsoft’s Project Natick, a years-long research effort to investigate manufacturing and operating environmentally sustainable, prepackaged datacenter units that can be ordered to size, rapidly deployed and left to operate lights out on the seafloor for years,” the company wrote.

Phase one of the project was to show that the underwater datacenter was possible. Phase two will focus on researching whether it is logistical, environmentally and economically practical.