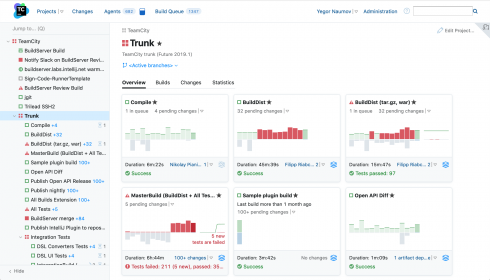 The UI now works as a single-page application, which means all changes can be viewed in real-time, and it adds features such as a new sidebar, a dashboard-style project overview and a branches tab that displays the default branch.

Users of TeamCity 2019.1 can get full support for GitLab and GitLab merge requests by picking a GitLab project from the list.

The release also adds board and kernel-agnostic build directories to increase the velocity of Genode system scenarios. The new kernel-agnostic virtualization interface lets one virtual machine monitor implementation combine with kernels such as NOVA, seL4, or Fiasco.

Equalum uses open-source big data frameworks like Spark and Kafka to enable companies with data-rich enterprises to consolidate data from disparate systems into central stores like warehouses and data lakes to power real-time analytics, according to the company’s post.

“The need for access to real-time insights across industries including manufacturing, finance, healthcare, retail, and media has never been greater,” said Giovanni Canetta Roeder, managing partner at Planven, who participated in the round of funding.

Cawemo enables multiple individuals to collaborate on workflow processes on a single platform. It uses the uses the BPMN 2.0 standard modeling language to graphically visualize workflows, which can be embedded in websites and exported as graphics for text documents.