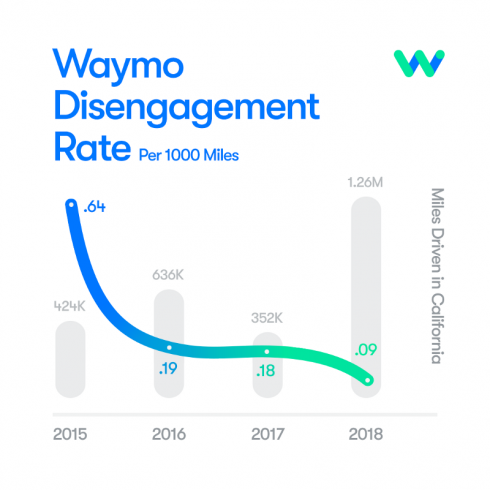 Self-driving company Waymo has released a report detailing its disengagements, or how often a human had to take over driving, in California. According to the company, its disengagement rate in California dropped to 0.09 per 1000 miles in 2018, which is a 50 percent reduction and 96 percent increase in the average miles driven between disengagements. In addition, it also tripled the amount of driving it did in 2017.

“A lower rate of disengagements shows that our cars are getting better at recognizing and handling a wide variety of driving situations, including “edge cases” across the cities we’ve been testing in: those unusual situations that a human driver might see only once (or never) in a lifetime of driving. As we continue to expand new territory or introduce new skills, disengagements will occur. Disengagements in these cases are actually a good thing because they are the equivalent to discovering and solving an issue with our car’s capability. As we continue to expand our test fleet, we actively seek places that present challenges to give our fleet the opportunity to learn,” Waymo wrote in a post.

In addition, it now scans over 50 billion installed apps daily to ensure that apps already on users’ devices aren’t being malicious.

Microsoft releases new window class, AppWindow
Microsoft has announced the release of AppWindow, a new window class that will make it easier to create multi-window experiences. According to Microsoft, any AppWindows created can run on the same UI thread they were created in.

Microsoft has written a post detailing exactly how to create an AppWindow, connect content, and show it.

It eliminates many of the common challenges that developers face when building databases from scratch, such as identifying the optimal database infrastructure footprint, scaling infrastructure as business needs grow, designing and managing highly available infrastructure, implementing a complete backup and recovery plan, and forecasting operational costs.