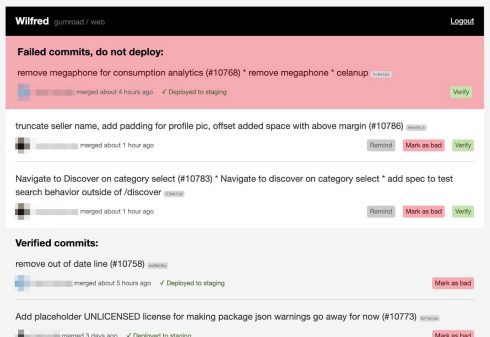 Gumroad’s commit verification tool, Wilfred, is now open-sourced. Gumroad is an online platform that connects creators with consumers. Wilfred was created to tackle deployment challenges. “If you’re an engineer, you may be familiar with the “can I deploy?” dance. You want to deploy your commit to production, but you’re not sure if all the other commits waiting to be deployed are ready to go,” Sahil Lavingia, CEO of Gumroad, wrote in a post. The project enables users verify commits on staging before deploying to production.

Wilfred connects with Slack to let users know when commits are ready to be verified on staging, and ready to be deployed to production, according to the company.

“With Amazon MSK, customers can stand up Apache Kafka clusters in minutes instead of weeks, so they can spend more time focusing on the applications that impact their businesses,” said Rajesh Sheth, the general manager of Amazon MSK at AWS.

According to the company, Amazon MSK continuously monitors underlying server health, automatically replacing servers when they fail and patching servers in need of updates.

The new Visual Studio blocks synchronously autoloaded extensions to improve startup and solution load times. It also introduces a redesigned branching experience in which the IDE does not completely unload and reload the solution during branch switches.

Microsoft said that stepping through code to debug is now 50 percent faster compared to Visual Studio 2017.

Visual Studio 2019 also improved the debugger for C++, which now uses an external 64-bit process for hosting its memory-intensive components and improved.

CodeStream supports 14 IDEs and developers can add issues right from the IDE to any of eight services that include Azure DevOps, YouTrack, GitHub, Jira and more.

“Whether you personally hop back and forth between editors depending on what you’re working on, or work on a team where everyone uses different editors, CodeStream strives to make it easier to discuss, review, and understand code,” said Michael Gersh, co-founder of CodeStream.

Switching to NoSQL is easier than you might think