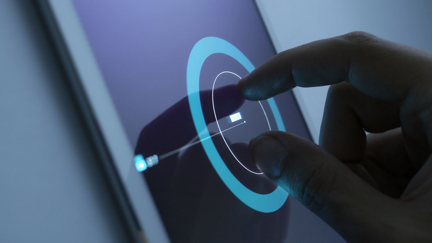 The touch interfaces and infotainment systems in modern automobiles are outdated; they’re counterintuitive to safety and concentration. Drivers’ eyes are constantly darting back and forth, switching their focus from the road to a touchscreen console, making sure to press the tiny button or widget they need to change the radio station or answer a phone call.

UI designer Matthaeus Krenn went back to the drawing board and created a fluid, intuitive car UI you don’t even need to look at.

Instead of searching for a button somewhere on the touchscreen for each option, Krenn’s touch interface is one master control with no fixed point of reference. The interface appears right under the driver’s fingers the moment they touch anywhere on the screen, becoming a point of reference that is simply dragged up or down to control any given setting.

Krenn, a freelance designer based in San Francisco, has worked as a product and mobile experience designer for companies such as IDEO, Microsoft and Cue. He designed the UI with a multi-touch display that gives the driver eight setting options based on the number of fingers used and the distance between the fingers.

The two modes, entered either by scrolling with fingers close together or spread further apart, each control four settings based on the number of fingers scrolling. For example, two fingers close together can control volume, while three control music source, four control temperature, and five control airflow. If the driver’s fingers are spread apart (invoking the second mode), two fingers scroll through a music playlist instead of changing the volume.

All these actions rely on muscle memory. The driver can focus his or her attention on the road, knowing how many fingers are needed to control any given setting without worrying about where on the touchscreen they hit.

A prototype of the UI is available for iPad. For more information, visit Krenn’s website.