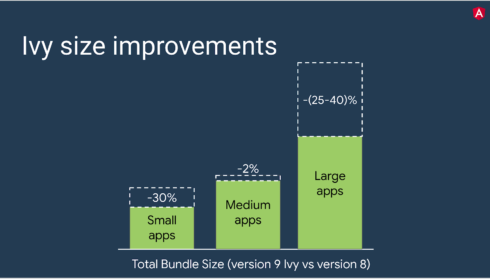 The Angular team has announced the latest major release of its web application framework. Angular 9.0 features updates to the framework, Angular Material and CLI. In addition, this release makes the Ivy compiler and runtime the default as well as improves testing components.

“This is one of the biggest updates to Angular we’ve made in the past 3 years, and we’re excited for all of the ways it empowers developers to build better applications and contribute to the Angular ecosystem,” Stephen Fluin, developer relations lead at Google, wrote in a post.

RELATED CONTENT:
Angular powers business apps in the enterprise
Web development: So many choices to get the right fit

Ivy is the framework’s next-generation compilation and rendering pipeline. According to the team, the implementation of Ivy will significantly reduce the size of applications. In addition to switching apps to Ivy by default, the 9.0 release adds new bug fixes and improvements such as smaller bundle sizes, faster testing, better debugging, and improved CSS class and style binding, type checking, and build errors.

The TestBed in Ivy has been improved to make it faster and more efficient. “With this change, the framework’s core acceptance tests are about 40% faster. We would expect users to see their own application test speeds to be around 40–50% faster,” Fluin wrote.

To help Ivy with debugging, the team adds more tools and introduced the new nj object for debugging.

The team also enables the Ahead-of_Time compiler on by default, moved the build time i18n substitutions to later in the build process, focused on making ng update more reliable, and provides new options for ‘providedIn.’

Other notable features include TypeScript 3.7 support, the introduction of component harness, and IDE and language service improvements.

“This release is the culmination of over 2 years of work. We’re really excited about the future and possibilities that this work opens up,” Fluin wrote.