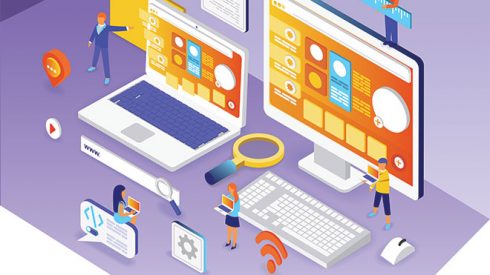 Since its release more than 20 years ago, JavaScript has gone through a lot. But even though it has come so far, the language continues to grow and evolve, and interest in using it is still rising. JavaScript is an incredibly approachable language, which probably has something to do with why it has become so popular among developers. Its robust community continues to add to JavaScript’s rich ecosystem of libraries and frameworks.

Other languages have similar ecosystems, but one thing that has propelled JavaScript forward is debugging capabilities available in TypeScript and Chrome, according to Todd Anglin, vice president of product strategy and developer relations at Progress.

“I think JavaScript is going to be on this journey forever, as long as people find ways to make software easier to create, more robust, and more secure,” Anglin said. “It’s just a continuum.”

Getting more involved with standardization

One positive step that should help advance JavaScript even further is that the community is getting more involved in the standardization process. “Now we’re starting to be having more initiative towards making JavaScript what we want it to be, and I think ECMAScript has a lot to do with that,” said Tara Manicsic, developer advocate at Progress. “And the community being more involved in wanting to make the language better instead of complaining about it is a huge step and is something that’s really great.”

Recently, the JavaScript Foundation announced that it intended to merge with the Node.js Foundation. According to Manicsic, this was a result of so many developers using Node, not just for JavaScript on the back end, but for front end and new technologies from such initiatives as IoT.

“Node is being incorporated more and so you’re seeing more people in the community interested in the foundations merging and trying to see what that means for them as developers,” said Manicsic. “I think they’re starting to realize more just how important standardization is and how important it is to bring the JavaScript communities together from fractured communities.”

According to Anglin, most people never even think about evolving a language as long as they’re using tools that are working for them. “I do think it takes that one percent or 0.01 percent that will see a language that’s working well for a lot of people, has a great ecosystem and libraries, and still say that it can be better,” he said.

Jory Burson, standards liaison at Web Platform consulting group Bocoup, added that an important thing to consider when evolving a language is knowing when to say no to things. “We’re designing JavaScript as a product, so saying no to a lot of things is often more important than what we end up saying yes to,” Burson said. “By not accepting every suggestion or proposal that gets made, JavaScript becomes a stronger project.”

The JavaScript ecosystem contains several libraries that solve problems for subsets of users. Sometimes, a library’s functionality may be added to the language, but there are many things that will be considered by TC39, the ECMA technical committee for JavaScript, before that can happen. According to Burson, the committee may ask questions like: “Does this solve problems for other use cases? How big of a need is this? If we put this in the language, is this going to be a problem for other contexts?”

Another issue is that there is a limited amount of syntax available, Burson added. Once you use up a certain piece of syntax, it is no longer available for another use case.

One example of a library’s functionality being added to JavaScript is leftpad, which is used for handling indentation and trimming. The library was taken down in 2016, but many projects used it as a dependency, so when it was removed, it crashed a lot of projects, Manicsic explained. Eventually, that functionality was added to the standardization of JavaScript.

JavaScript has reached a point in its maturation and evolution where the hardware is what’s holding it back. “I think one of the bigger opportunities with JavaScript is in the hardware,” said Anglin.

The industry is at a point where the software engines powering JavaScript are pretty fast and have been optimized for the language. “The optimizations that can take it even further are now showing up in the hardware,” said Anglin. At this point, certain chip manufacturers are optimizing their chips so that JavaScript can be processed faster.

“I think what’s nice about that is that it will actually benefit a lot of other scenarios where JavaScript may run in the future, like embedded devices or low-powered devices, where you don’t necessarily have as much horsepower to drive the software the can make JavaScript faster,” said Anglin. “The things that will allow JavaScript to be faster at that point will actually be in the hardware.”

He added that those sorts of optimizations had already been put into place for languages like C and C++, so seeing this coming for JavaScript shows the position that the language is in today.

Currently, there are only a few chip manufacturers starting to bake these optimizations in, but Anglin predicts that given the popularity and increasing usage of JavaScript, other manufacturers will soon start to follow suit.

JavaScript is on the rise in education

“I think we’re going to see more and more universities start to do their curriculum around JavaScript instead of things like Java,” said Manicsic. “Every time somebody wants to learn I always tell them to start with JavaScript because it has the fundamentals and the core concepts of CS in general, and it teaches you how to think logically just like Java, .NET, and C# do, but it’s much more human-readable.”

She believes that because JavaScript is so approachable, more schools will start making it the first step in introducing computer science.

In addition to it being more approachable than some other languages, more and more people are hiring for JavaScript developers, and universities recognize that and want to make sure that they are preparing their students for the real world of web development.

JavaScript has even moved beyond simply being a web development language. In the age of Big Data, being able to analyze all of the data that you have is essential and can help you unlock previously unknown insights. Analytics company Cambridge Intelligence has used JavaScript to create a powerful data visualization toolkit.

“If I show you the difference effectively from looking at a table like this, to looking at connections of the same data set, then immediately you can see there’s a richness and a lot of information in the connections themselves that you cannot possibly ever find within a spreadsheet,” said Joe Parry, founder and CEO of Cambridge Intelligence.

When people go from looking at data on a spreadsheet to suddenly seeing it laid out in this exciting way, it changes their interest, Parry explained.

While Cambridge Intelligence isn’t the only company providing data visualization tools, it is a testament to the power of JavaScript for being able to run all of this and run it on practically any device.