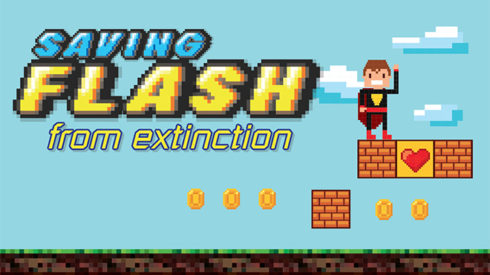 Flash is quickly approaching the end of its life. Adobe plans to halt updates and distribution by the end of 2020, and encourages any content creators to migrate their existing Flash content to new open formats like HTML5, WebGL, and WebAssembly.

“Several industries and businesses have been built around Flash technology – including gaming, education and video – and we remain committed to supporting Flash through 2020, as customers and partners put their migration plans into place,” Adobe wrote in a blog post when it announced its plans in 2017.

The problem, however, is not everyone is ready to say goodbye to Flash.

“Even though the openness and accessibility of web standards is the best way to go, the ease of use and the joy of creativeness with Flash is something I still miss now and then,” Juha Lindstedt, web architect who created a petition to open-source Flash, told SD Times. “There was a movement around cool Flash sites, developers almost competing who would make the coolest art piece or website.”

Lindstedt does acknowledge that the Internet was very different back then. He explained when Flash was at its most popular, the Internet was still new and developers were using Flash to create almost pieces of artwork to showcase their talent. Today’s Internet is about being more social and connected. “I would compare Flash to music videos,” he said. “Back in the music videos’ golden era, they used to be art pieces, sometimes even separate short films. MTV was showcasing the best music videos and FWA [Favorite Website Awards] was similar for Flash projects,” he said.

Open web technologies are becoming the default choice when creating web experiences because they are fast and more power-efficient. “They’re also more secure, so you can be safer while shopping, banking, or reading sensitive documents. They also work on both mobile and desktop, so you can visit your favorite site anywhere,” Anthony Laforge, product manager of Google Chrome, wrote in a blog post when Google announced its own plans to remove Flash from Chrome. As of July 2019, Flash has been disabled in Chrome by default.

Despite the general agreement that Flash can’t keep up with today’s user demands and experiences, most would agree that throughout its life Flash has been the foundation for many web skills. “For 20 years, Flash has helped shape the way that you play games, watch videos and run applications on the web,” wrote Laforge.

Because of this, there are many efforts looking to keep Flash around in some capacity. “Flash is an important piece of the Internet’s history. We need to somehow preserve those interactive art pieces,” said Linstedt.

Preserving Flash content
One effort to preserve, or reimplement Flash was the Gnash project, an open-source Flash alternative that lived under the Free Software Foundation banner. “Unfortunately, Gnash soon fell behind Adobe’s player in terms of features,” Alessandro Pignotti,  founder and CTO of Leaning Technologies, a compile-to-JavaScript and compile-to-WebAssembly tools provider, and author of the open-source Flash player Lightspark, wrote in a post.

Other efforts, in addition to Linstedt’s petition to open-source Flash, include Shumway, an HTML5 technology experiment; Ruffle, a Flash Player emulator written in Rust; and Lightspark, a C++ implementation of the Flash player,

“If there is one lesson that I learned from working on Lightspark, it is that reimplementing Flash is a very, very, very hard and time-consuming task,” wrote Pignotti. “That’s why I am certain that the only practical, robust way to accurately preserve Flash content in the medium and long term is not through a reimplementation.”

Along with his team at Leaning Technologies, Pignotti recently announced CheerpX, a new technology designed to run unmodified x86 binaries in a browser using WebAssembly.

“There is so much of Flash content [out there]. We are talking thousands, tens of thousands of content and that is if you are only looking at video games. But that is not the only type of content. Over the years there has been a lot of enterprise content, dashboards, logistics, traditional databases and front-end solutions written in Flash or in various frameworks built upon Flash like Flex,” Stefano De Rossi, founder and CEO of Leaning Technologies, told SD Times.

With no intervention, CheerpX allows users to enjoy Flash applications, play Flash video games in a browser, and run legacy, enterprise-grade Flash content that don’t have the means or resources to be rewritten from scratch in a modern technology.

“It is about preservation of all the content, and also about migration and modernization of existing legacy apps,” said De Rossi.

CheerpX is still in a prototype phase, but is currently capable of fully executing unmodified apps, the team explained. Going forward, the plan is to directly download the Flash binary over HTTP, write a native x86 host application, and provide access to browser resources.

“As you have probably guessed by this point, our solution to preserve Flash in the long term is to run the full, unmodified, Flash plug-in from Adobe in WebAssembly,” wrote Pignotti