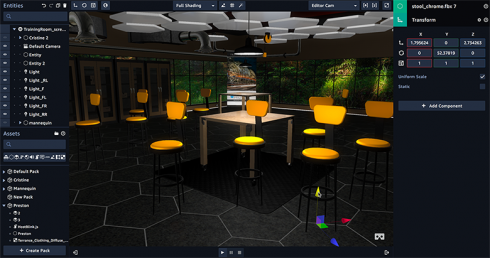 Amazon announced the general availability of the Amazon Sumerian VR, AR and 3D application development tool yesterday. Originally announced in November, the tool aims to lower the barrier of entry for developers who want to get started making VR, AR and 3D experiences.

“You can create realistic virtual environments and scenes without having to acquire or master specialized tools for 3D modeling, animation, lighting, audio editing, or programming,” Jeff Barr, AWS tech evangelist, said in the announcement. “Once built, you can deploy your finished creation across multiple platforms without having to write custom code or deal with specialized deployment systems and processes.”

Amazon Sumerian is cross-platform, allowing developers to target any VR platform or browser with support for WebGL or WebVR, and is accessed through a web-based editor powered by AWS.

Developing bots for Hangouts Chat
Google has announced that it is releasing a framework for developing bots for messaging platform Hangouts Chat. According to Google, in addition to plain text responses, the bots will be able to respond with cards which are rich UIs that can display header information, structured data, images, links, buttons, and more. Users will be able to interact with the card’s components and potential update the displayed information.

“Whether it’s to automate common tasks, query for information, or perform other heavy-lifting, bots can really transform the way we work,” Wesley Chun, developer advocate for G Suite, wrote in a post.

It also continues to partner with machine learning and artificial intelligence partners in order to make the Data Science workflow more efficient, the company explained.

“Cleaning and preparing data is not the most valuable use of time for data scientists,” said Frank Bien, CEO of Looker. “Looker eliminates that time-consuming work, making data science workflows vastly more efficient. With Looker, data scientists can spend more time on high-value model building, creating greater business impact, and moving on to the next problem faster.”

OpenAPI 3.0 definitions automate API lifecycle processes such as creating interactive and consumer friendly documentation, prototyping client SDKs, and generating test cases. Swagger Inspector removes all of the guesswork and tedious labor from defining APIs in the specification and streamlines the API development process by using a single tool to test APIs and generation OpenAPI 3.0 definitions.

“Standardizing on OpenAPI Specification 3.0 to document new APIs is a relatively trivial task, but retrofitting your existing APIs can be time consuming and tedious,” said Christian Wright, EVP and GM, API Business at SmartBear. “With full support for the OpenAPI Specification 3.0, Swagger Inspector makes documenting existing APIs as seamless and smooth as possible.”