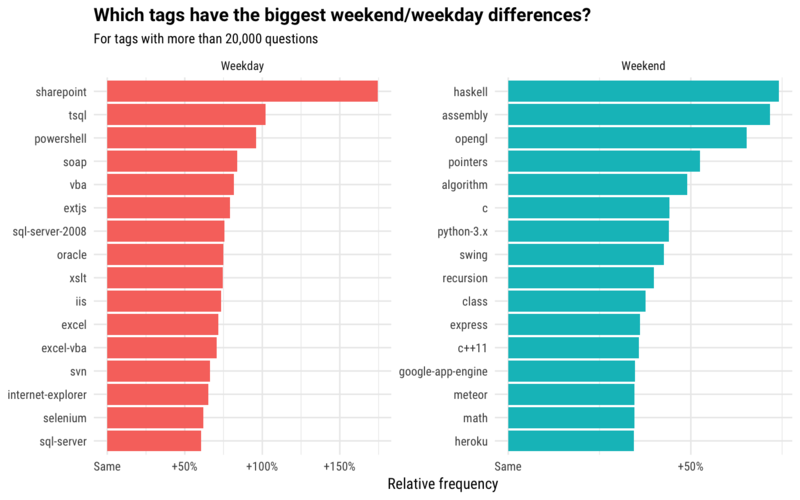 Stack Overflow wanted to see what languages tend to be used on the weekends by developers, so the organization used its public StackLite dataset on Kaggle to explore that question.

According to Stack Overflow, it saw low-level technologies were popular on the weekends, like C++, C, pointers and assembly languages, and it saw tags like “math,” “algorithms,” “recursion” and others. Also in its analysis, Stack Overflow saw Heroku and Meteor were often used for prototyping, which could suggest they are being used for hobbyist or weekend projects.

To kick off this discussion, the team shared an API proposal and prototype for the WebKit Open Source project. The proposal anticipated how next-generation graphics APIs would work, and the WebKit team will start “landing code” in WebKit soon so developers can try out the prototype themselves.

More information on the initial API proposal can be found here.

BlackBerry releases communications platform for developers
BlackBerry is giving developers a secure way to add messaging, voice and video capabilities into their applications and services. The company just announced the BBM Enterprise SDK.

“We are constantly innovating and looking for ways to leverage our legacy and expertise in secure mobility to solve real business problems,” said Marty Beard, COO of BlackBerry. “We are opening up a new revenue stream for the company with a fully cloud-based communication service that is designed to help developers, ISVs, and enterprises meet the most demanding security and compliance requirements.”

Microsoft previews custom speech service
Microsoft has added new capabilities to its cognitive services. The company announced the public preview of its custom speech service, previously known as the Custom Recognition Intelligent Service. The new service allows developers to customize the company’s speech-to-text engine to reflect the data and information on their apps.

“If your application contains particular vocabulary items, such as product names or jargon that rarely occur in typical speech, it is likely that you can obtain improved performance by customizing the language model,” the company wrote in a blog post.

CoreOS moving to Kubernetes
CoreOS has announced it is moving from fleet to Kubernetes. According to the company, its fleet cluster scheduling software will be removed from Container Linux this time next year. Until then, it will remain in maintenance mode to receive security and bugfixes.

“Over the past two years, we’ve seen a shift in the way organizations think about and manage distributed applications,” wrote Josh Wood, CoreOS team member, in a blog post. “It started with fleet, and today we are seeing widespread adoption of Kubernetes, which has become the de facto standard for open source container orchestration. This move reflects our focus on Kubernetes and Tectonic for cluster orchestration and management. It also simplifies the deployment picture for users while delivering an automatically updated Container Linux operating system of the absolute minimum surface and size.”