Artificial intelligence is often depicted in films as the scientific floodgate to apocalyptic doom, a “Terminator,” “The Matrix” or “I, Robot” scenario where machines quickly turn on humanity. “Chappie,” the latest sci-fi parable from director Neill Blomkamp, portrays an AI being that learns and interacts with the world in ways that are innately human.

“Chappie” takes an inside-out look at the swirling mass of conscious code inside an artificially intelligent mechanical being, or as Wolfgang Fink calls it, a sentient autonomous and synthetic reasoning system. Fink, a researcher at the University of Arizona and the California Institute of Technology, is studying and developing systems that can react to and explore environments independent of human control.

“We’re not dealing with what is commonly known as artificial intelligence,” said Fink, who was given information about the film’s production to assess how it portrayed AI. “That’s often used in the wrong context. AI is exclusively rule-based, meaning a machine encounters a situation and reacts a certain way. In Chappie’s case, it has the capability to learn and self-modify. In that way, [in the film] it grows up like a child, modifying itself as it goes. The hallmark of an autonomous system is being influenced by its environment, rather than being pre-programmed.”

Fink’s work includes research with NASA’s Jet Propulsion Laboratory to develop autonomous systems for landing on and exploring the terrain of Mars. According to him, Chappie represents the evolution of autonomous systems in the way the machine ingests diverse data sources and combines them abstractly to develop reasoning in any given situation.

(Related: Can we code conscious programs?)

In the film, Chappie—a decommissioned police robot in Johannesburg, South Africa—has its standard rule-based AI software reprogrammed with an experimental consciousness program by Deon Wilson (Dev Patel), the coder who developed the software powering the police bots. “Chappie” follows the curious autonomous being as it learns from the world around it, the humans it meets and the experiences it has to ultimately become self-aware.

By depicting both the autonomous freedom of Chappie and the rules-based logic of the standard police robots, Fink pointed out that the film confronts the traditional expectations associated with artificial intelligence.

“Chappie has a self-sustaining drive,” he said. “He doesn’t want to die. He calls himself Chappie. That aspect of it is the Holy Grail, if you will. That’s where we need to make a major jump in self-awareness. Also to be sentient, where you have the ability to think and experience in a subjective way. Unlike the police robots, Chappie is not governed by a specific set of rules by which he has to act. Humans don’t have mathematical laws in our heads. We think. We use deductive reasoning, which is the foundation of true autonomy.”

Through the eyes of a robot
The most unique aspect of how the film portrays this self-aware autonomous system is showing Chappie’s development through a series of point-of-view interface shots. 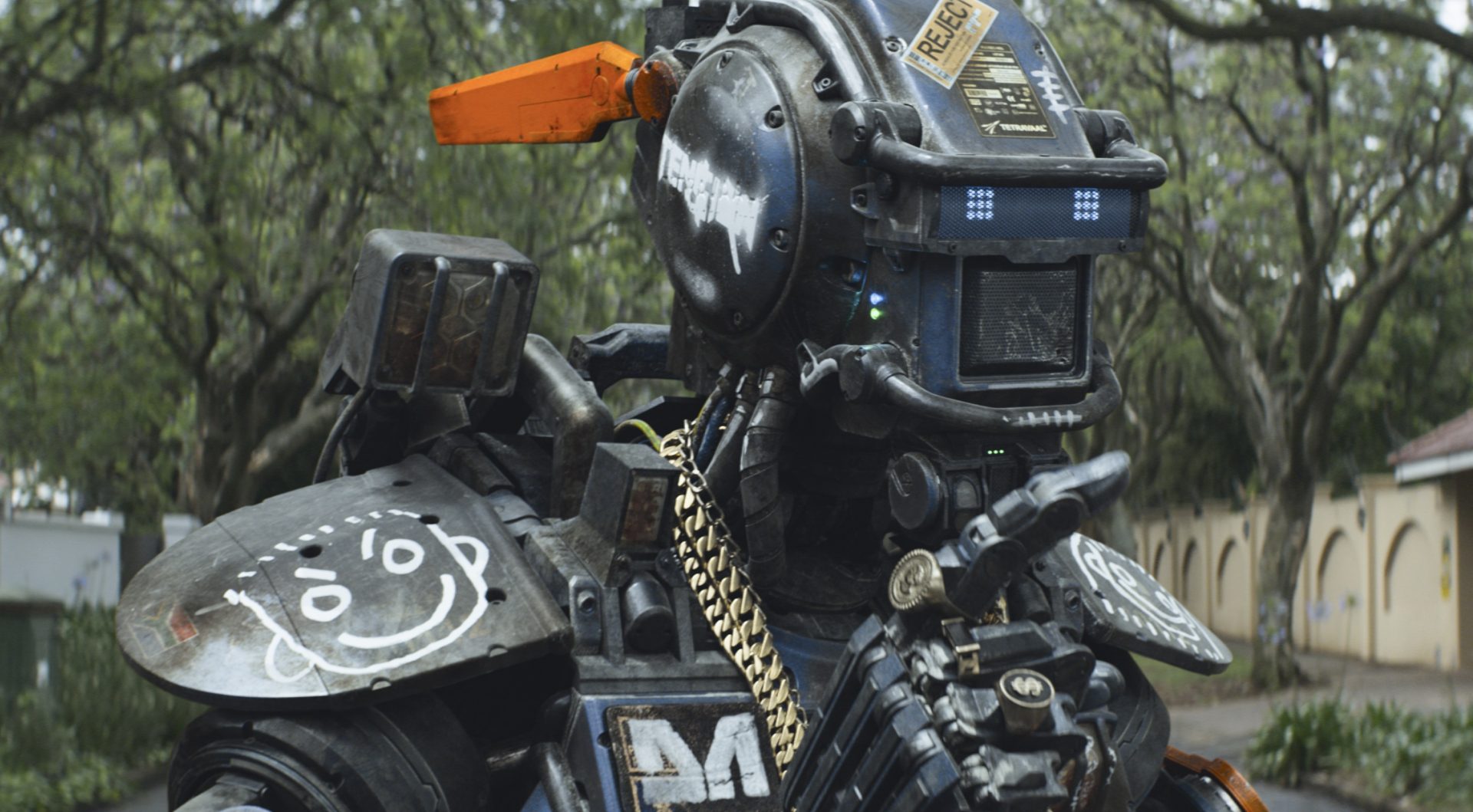 Chris Harvey, the visual effects supervisor for “Chappie,” talked about the differences in depicting the software interfaces of three different types of machines: the standard police robots (or “scouts”); the hulking, human brain-controlled “Moose,” mentally piloted by Vincent Moore (Hugh Jackman); and the point of view of Chappie, which evolves and becomes more complex as the film progresses.

“We tried to tell part of Chappie’s story through POV shots,” said Harvey. “We have three classes of POVs. The scouts’ POVs and Moose’s POV are similar in their designs, with static menu bars and tracking markers. Chappie’s POV evolves over the course of the film.”

Chappie’s POV shots begin with an almost empty interface. It has the root software elements of the scouts—a tracking box for its line of sight, a general readout of its internal systems and surroundings—but nothing dynamic. Over the course of about 30 POV shots throughout the film, Chappie fills up its interface with more and more code representing its expanding knowledge of the world.

“There’s a window on the right [of the interface] that’s constantly growing,” Harvey said. “It’s like he’s writing new code, writing memories, writing thoughts as he’s seeing and interpreting the world. He’s constantly writing his own new code, and then on the left of the interface we integrated a text cloud. Throughout the film, he keeps adding words to it, filling up his text cloud with the things that are important to him. The words that become most important to him, like ‘Mom,’ become quite large.”

“Chappie” director Blomkamp and actor Sharlto Copley, who inhabited the motion capture performance behind the titular robot, also worked to imbue Chappie with a certain degree of humanity. For Harvey, his perception of Chappie as a being changed a great deal from the initial concept art and models to Copley’s performance and the finished character.

When the special effects team first got the script and did the design work, they felt they had an idea of who Chappie was. Ultimately, the combination of the design, Copley’s performance and the subsequent animation changed the perception of who Chappie was supposed to be. Harvey and the special effects team focused in post-production on conveying a range of Chappie’s emotions through Copley’s mannerisms while staying true to robotics.

“We used Chappie’s ears, his brow bar, his chin bar and even down to the LEDs on his face to blink or move to convey Chappie’s emotions,” Harvey said. “Sometimes on quieter scenes, we would take things like Sharlto’s eye motions and put those movements onto Chappie’s head for those subtle refocusing and twitching movements. We tried to take every nuance we could out of Sharlto’s performance and find a place to put it on Chappie to help read that emotion.” 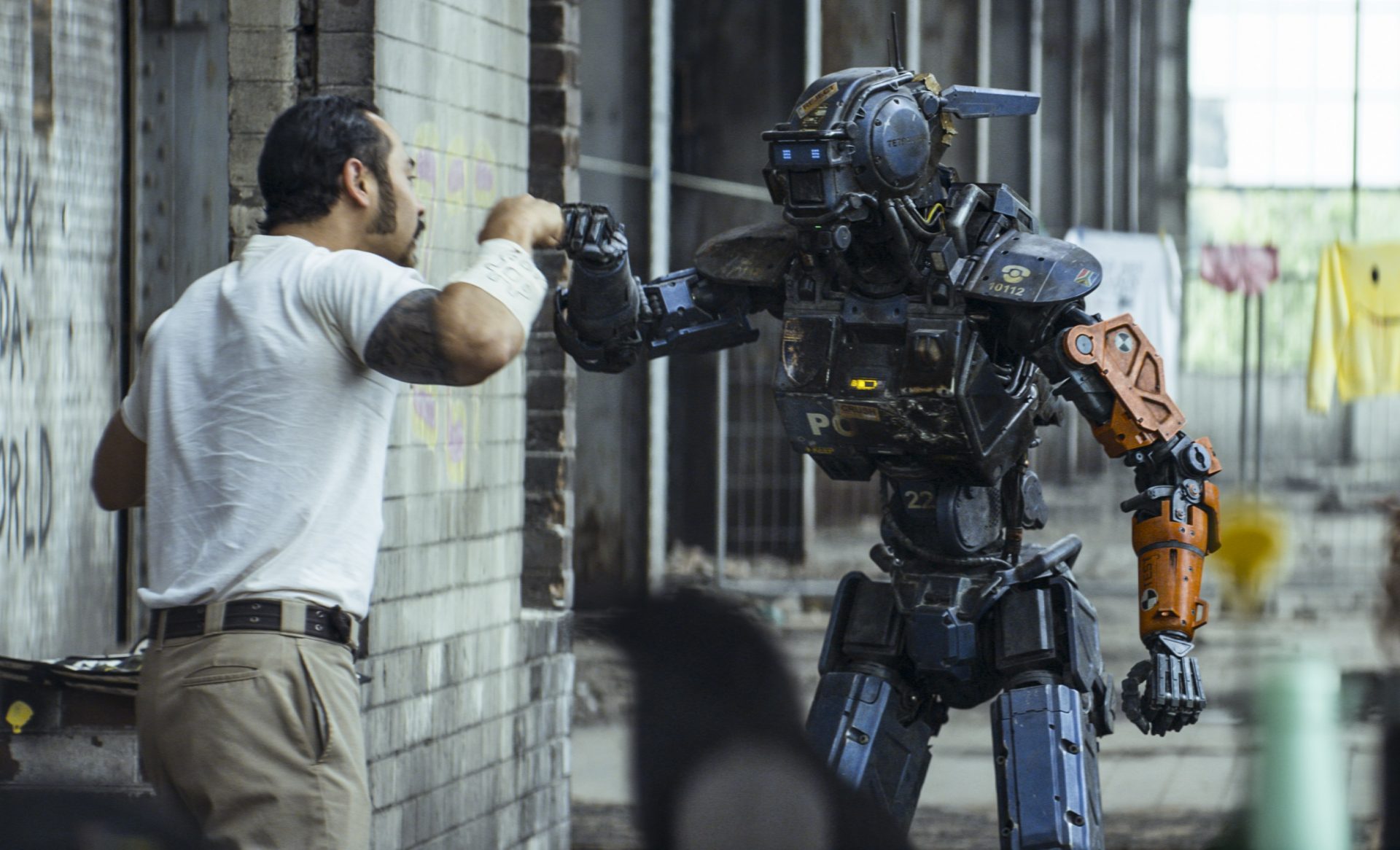 “Chappie” is just a movie, one with idealistic protagonists, a giant weapons corporation flooding the streets with lethal robots, and a one-dimensional villain hell-bent on destroying them in favor of even bigger, scarier robots. But it’s a movie that offers a different perspective on the societal implications of sentient intelligence.

Fink pointed to efforts like the Future of Life Institute in voicing concerns about artificial intelligence and autonomous systems, but he believes the perceived dangers shouldn’t stifle scientific innovation.

“Stephen Hawking, Elon Musk and others recently voiced concerns, and I would share their concerns if we were talking about truly autonomous systems, where you cannot predict or control how it will develop,” he said. “Chappie nicely portrays some of the more immediate uses we will see in the coming years—robots in the police and in the military. Chappie itself is a level of autonomy we don’t see yet. It’s a new component, and one that’s both exciting and scary.”